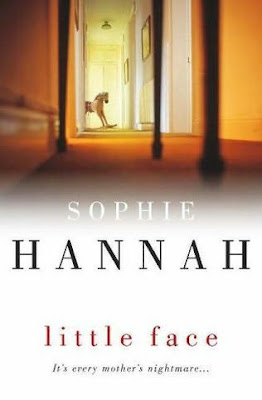 [Bogen er desværre ikke oversat til dansk]
This British novel is the first in a series, and the author´s crime fiction debut.

Young Alice Fancourt marries David, the single father of Felix, and move into his rich, generous mother´s large and stately home. When the novel begins, Alice has just given birth to Florence. She leaves her home for the first time after the birth, visits a health club and returns home after two hours to find a baby she does not recognize in the cot. Her husband claims she is having a mental break-down after a difficult caesarian, and the police do not know what to think. A week later, David Fancourt report his wife and the baby missing.

The leader of the police team is Sergeant Charlie Zailer, a single woman, and a modern, efficient police officer. Usually she and DC Simon Waterhouse respect each other and enjoy working together, united against their unlikeable superior, Inspector Proust, the man behind this intelligent observation: "Women talk drivel because it entertains them. They fill the air with random words, and they don´t much care whether what they´re saying has any basis in fact."

Charlie wants more than friendship from Simon, however, which has made things difficult between them. The plot is good and absorbing, and on the whole this is a very promising debut, but neither Charlie nor Simon is able to tackle the embarrassment between them in a mature way, on the contrary they let misunderstandings cloud their judgments now and then.

My overall impression: A well-written, capturing psychological thriller about living with fear and cruel manipulation, a book which is very difficult to put down (actually I didn´t - I finished it some time after midnight).

Competition coming up
As I am the lucky owner of two identical copies of this book, I will give any reader of English fiction the chance to win a twice-read paperback of "Little Face" next week.
Keep an eye on my 10th Bait of the Box post.
Indsendt af Dorte H kl. 13.18

THis sounds absorbing. (I love the cover too!) I like a good psychological thriller once in a while. Thanks for the review.

Beth, I plan to make a competition some time because I have two copies of this book (maybe next week) so you have a chance of winning a slightly used paperback before long.
I probably read 4-5 times as many ´real´ crime novels as thrillers, but this one was really good.

It's a very scary story, particularly for parents, who know what it's like to have a baby. The husband is a real piece of work, and I'm a little concerned that Sophie Hannah could even think up some of the nasty things she wrote.

Her books just get better, and the police characters develop quite well.

I've got this on my wishlist - hopefully I'll find a copy soon.

Ann, thanks for recommending Sophie Hannah. I am certainly going to read more of her books.

Farmlanebooks (have forgotten your name right now): you must come back next week & try to win the book :)

I have a different Sophie Hannah book in my TBR pile - you've convinced me to bump it up a few notches 'cos I've been looking for more of the psychological type books lately.

I'll definately come back next week to try and win it!
Jackie

Bernadette, I think this one is quite satisfactory from a psychological point of view without being too horrible for this chicken.
Jackie, I am glad I will have at least one participant :)

For Bernadette in Australia - I have been reliably informed that Sophie Hannah is on her way to Australia this very moment, so look out!

This sounds really good! I'll have to see if its available here in the U.S.

Hi Kelly.
Or you could try to win it here. Come back on Wednesday and see what you have to do - that is, if you are satisfied with a slightly used paperback from the UK which has spent a few weeks on a Danish shelf :)