The Coroner and the Flu

Caught up in bed, sweating, croaking and dizzy, I have at least had fantastic company. I have caught up with the second half of a marvelous book, 200 page-turning pages without dozing off once.

M.R. Hall, The Coroner (2009)
This legal thriller is one of the best I have read for a long time. A book which deserves a coherent, enthusiastic, well-written review - and here we are, me and my flue! 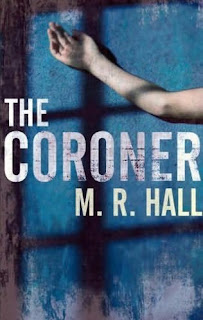 The book certainly deserves five stars:
One for the fantastic plot: the new coroner who will not just close her eyes.
One for the engaging and credible characters, especially 42-year-old Jenny Cooper who thought her new position as a coroner would be peaceful and give her time to get on with her life after a divorce and a mental break-down.
One for the environment: the legal setting is good and convincing, Jenny´s new home near Tintern Abbey is even better.
One for the ending: no spoilers, go and read the book!
One for keeping me awake for four hours.

And now you will probably want to read a proper review - go to Maxine, reviewing the book on Euro Crime, the very kind friend who sent me this wonderful book.
Indsendt af Dorte H kl. 15.16

So sorry to read you are not well, or have not been well - I hope you have recovered by now.
I am so glad you enjoyed the book - it is always a bit of a gamble to recommend a book strongly to people, in case they don't like it and you have encouraged them to waste their time. I enjoyed your post very much and your words about my Euro Crime review are too kind!

Thank you Dar. I am better today, but feel best when I can lie down.

Maxine, it was a fantastic book, and when I showed my daughter your comment we agreed that generous people usually regard other people as more generous than tight-fisted & suspicious people do, so there you are LOL

Sorry to hear about the flu. Seems to be rather global at present. Hope you come good soon.

I am so sorry you have been sick! How horrible. Hope you are back in action and feeling fit soon.

Lilly, I really enjoyed it thorougly in spite of my dizzy old head.

Kerry & Kay, thanks a lot. I had a headache last night. Today I am better, but best in bed :)
As long as I can read part of the day, it does not bother me too much.