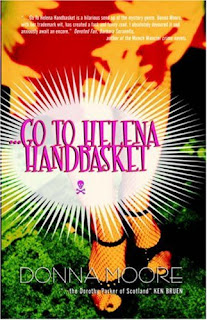 In the prologue of this hilarious whodunnit we meet a wanna-be serial killer, someone who obviously has some theoretical knowledge about the profession but needs practise. "I needed a signature." - "I looked down at the hand on the table in front of me. I picked it up by the thumb, dropped it into the ice-filled picnic box, and forced the lit shut. How much more of a signature did I need?"

Helena Handbasket, the private investigator, seems to be a cross between Kinsey Millhone and Philip Marlowe with his whisky bottle in the drawer. For some reason, Helena is hired to solve the case of a man who is missing, the only clues being his severed hands. As this is Helena´s first case, she feels in the mood for celebration:
"´I think this calls for some whisky.´ I opened the bottom drawer of my desk.
´Not for me, thanks,´ said Owen.
I opened the next drawer up. ´Brandy? Gin? Tequila?´
Another shake of the head.
Top drawer. ´Vodka? Bud? Cherry Brandy? Babycham?´
´Too early for me - but you go ahead.´
I looked at my watch - 10 am. Oh wel, it was bound to be midnight somewhere in the world."

Helena is fully equipped with antique desk, oddball secretary and a large number of useful friends, including a geeky hacker called Heidi Salami! Now and then she puts in a bit of work, but she is quite willing to let anything in trousers distract her from her case. Assisted by Ms Salami, she tries to move with the times by upgrading her equipment. This readers fears it can only be a sad waste of money. "I pulled out my mobile, which reminded me that I needed to recharge it, as it had been two months since I last did so. One of these days it would cut out on me at a most inopportune moment, and then I´d be sorry."

My overall impression: a refreshing and charming debut. And if you are a cat lover, the book includes a special treat for you. Helena´s cat, Virgil, a "hard-boiled, spitting tomcat", plays an important role and is by far the cleverest character of the book. 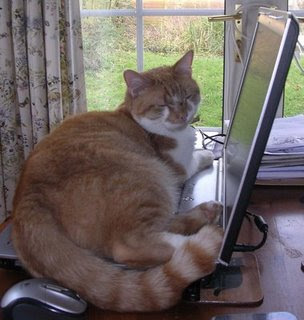 I enjoyed this book, too. Donna and I are both members of a Yahoo book group called 4 Mystery Addicts, and she's been known to delight us all with some of the things that have happened to her...especially her trips on the #62 bus in Glasgow!

I laughed again, reading your review - this book was so funny. I must try again with 4 Mystery Addicts, I cannot manage the format and can't get anyone to notice that I've commented! So I unsubscribed, but must try again.

Yes, this one was entertaining & very different.

This is new to me and sounds like a lot of fun! I'll have to add to the ever-growing list.

I know what it is like. You nearly have to read reviews with your eyes closed because there are so many on the list already :O

This is a great title; my husband enjoys puns :)

I laughed at your comment above, reading reviews with your eyes closed!

Dawn
She is Too Fond of Books

Dawn, then your husband should also enjoy every single page of this one.
And I am sure you know what I mean; I really have to limit myself to putting authors on my list who have been recommended by several people, or my PC will run out of space one day.