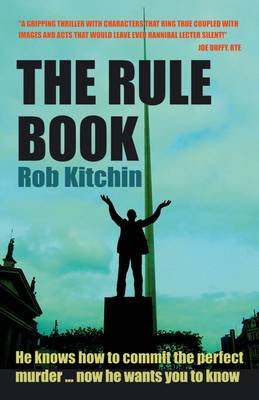 This Irish police procedural is the author´s first work of fiction.

The first paragraph:
“His eyes fixed on the sword and started to travel its length, down from the black handle, over the plain hilt and along the two-inch wide shaft to where it penetrated the young woman´s mouth. Beneath her head the pillow and sheet were stained a mix of red and black.”

A young woman is brutally killed, and the murderer has left what seems to be the first chapter of a rule book for serial killers in her shoulder-bag.

The arrogant murderer who calls himself “the Raven” continues to kill one person every day, leaving his calling card and a new chapter of his rule book on the scene of crime, but no other traces. He is convinced that the serial killer who adheres to these rules is invincible, and this game with rules (broken as well as unbroken) forms an important part of the intriguing web Rob Kitchin has spun around the reader.

Soon Detective Superintendent Colm McEvoy is so absorbed in this case that he forgets to eat and sleep. He is a single father who lost his wife to cancer recently and now he struggles to give up her killer, the cigarettes, and to be there for his eleven-year-old daughter, Gemma (while she does her best to take on her mother´s role).

For this flu-ridden reader it took a few pages to get into the story, as there are quite a lot of DIs and DSs to relate to in this complex mystery. It was certainly worthwhile, however, and after the first day I was entangled in the web and forgot all about my headache and my runny nose. In the beginning I feared that the combination of serial killer plus male writer might turn into a hard-boiled, graphic story, but in the best traditions of British crime fiction the focus stays with the police work and the increasingly personal battle between McEvoy and the killer.

And Colm McEvoy - the very human but frustrated copper and father - is one of those characters you really want to meet again – the sooner the better!
Indsendt af Dorte H kl. 14.09

As soon as I've finished with a slight glut of advanced reader's copies, I'm going to dive into this one!

Seana: it is a very fine and convincing debut! - it is obvious that Kitchin is used to writing, and he has handled the move from academic stuff to fiction better than many others.

Cathy: I am really curious to see what you think about it.

This one sounds good. I like mysteries where the focus stays on the police procedural aspect of things. Hard boiled and graphic are not for me!

Belle, in that case it should be a fine one for you. The author breaks one of the rules of that unwritten rulebook we all have for crime fiction, but in my opinion it is a fine mystery, and I didn´t mind.