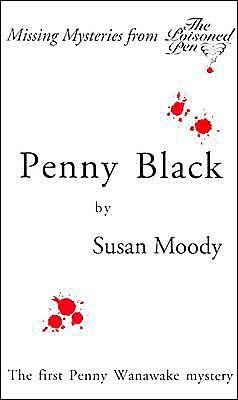 This crime novel is the first in the Penny Wanawake series, and Susan Moody´s debut.

Tall, black and beautiful Penny is an amateur sleuth and the daughter of an African diplomat and a British upper class woman. She goes to California to visit her old friend ´Marfa´, a blonde, beautiful and dumb model, only to realize that Marfa has disappeared.

Penny is a very resourceful and capable detective who is determined to find out what has happened to Marfa. The reader is somewhat better informed about the young girl´s fate, but not why she dies wearing a white orchid.

“… Marfa was still blonde, still dumb, but no longer very beautiful. Marfa was never going to look good in a bikini again. Nor in anything else. She wasn´t even going to make what you might call a tasteful corpse. She sat slumped in a washroom cubicle, the weight of her body holding the door shut. Her face looked as though a tribal witch-doctor had been experimenting with the placing of ceremonial scars.”

Penny is an entertaining and refreshing heroine, and if she needs a helping hand, Barnaby, lover, friend and gentleman thief, is at her service.

The series seems to be somewhat uneven, however. The fifth volume, Penny Wise, is a rather colourful action thriller to put it kindly.
Indsendt af Dorte H kl. 18.58

I've read 'The Italian Garden' by Susan Moody, and it's a disaster. Sorry, but it is. She should have decided beforehand wether the novel should be a crime, a thriller or a lovestory.

And the reason for my dislike is not because I'm a republican ;-)

I am sure I read one or two books by this author, years ago. Did she write any about bridge (the game, not the construction)? I think I have her in my mind as "cozy" but it was a while ago so I could well be wrong.

No need to beat about the bush, Søren. I could say exactly the same about Falling Angel. Deceptively like crime until you are halfway and then she turns it into .... well, I don´t even know an adequate term for it.
Penny Black may not be outstanding or spectacular, but a crime novel it is :D

Maxine, yes she did. Karen said so in my Penny quotation yesterday, and I can see that some people call it cozy.

The problem about Moody (as you can also see in my answer to Søren) is that her production is so uneven. She shows some talent, but apparently cannot make up her mind what genre she wants to write.

I enjoyed Penny Black, though I never read the later books.Susan Moody also wrote a series featuring a character called Cassie Swan. She even wrote a novel based on a long-running series of TV commercials.....

I haven't read any of Moody's novels. But Penny does sound like an interesting series detective - it's too bad the series is uneven.

"you are halfway and then she turns it into .... well, I don´t even know an adequate term for it."

Martin, I also think Penny Black was a fine and convincing debut and proves that Moody can write well.
Ms Bookish, I may try some of her other novels and review them later.

Søren, I had a feeling The Italian Garden was more of the same genre (or whatever) as Fallen Angel so I have never even considered trying it.

You always spotliht the mysteries I would otherwise never hear of and I'm so glad that you did. This one is just one more example. I will definitely have to look for it. Thanks Dorte!

Lilly, I think it is a question of finding what you look for :D
In my case I go for crime fiction, and I have also found several great new series by reading other people´s blogs.

I've finally finished the book - I didn't want to read your discussion of it until I was done reading it (in case there were spoilers).

I think Penny Black was a good mystery, especially considering it's a first book, but I don't think it's an exceptional one. I probably would never have heard about it if I wasn't reading books from the CWS's list of the best crime novels of all time.

Bibliophile: I agree completely. I was curious because Susan Moody is the step mother of our princess Mary. Obviously I had to see what she wrote. I think this first one is pretty good, but I have another one in the series which is really silly - pulp fiction, I´d say, and the ending is downright ridiculous.