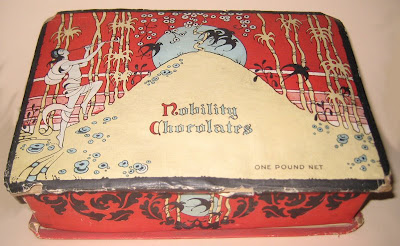 This British novel is not the first in the series.

“Guy was stretched out in a coffin, but he wasn´t dead. Prising his eyes open, he saw nothing but darkness. He was cold and naked save for a coverlet of coarse cloth. The air was foetid and he found himself fighting for breath. His mouth tasted of wet earth and he knew he´d been buried six feet under. He banged on the lid until his knuckles bled, but there was no way out. He screamed for help, but nobody heard. When he prayed for rescue, nothing happened.”

The Rules:
If you recognize the quotation, or if you think you are able to guess who wrote it, please post a comment. Just leave a hint, do not spoil the fun by giving too much away. The book will be reviewed on Friday as usual.
Indsendt af Dorte H kl. 15.16

Etiketter: bait in the box

This one I haven't read. I am sure I would recognize that quote. Chilling. I would be interested in reading it for sure!

I'm with Louise - it sounds like the sort of thing I would remember if I had read it.

The excerpt is creepy. I'm a big fan of Kill Bill Volumes 1 & 2, and there's a scene where The Bride has to get out of a similar situation. Yikes.

Thank you for your comments. I think we need some of my British crime fans to help out here ;)

Sounds familiar somehow. Perhaps a book with a labyrinthine plot?

Martin, you're not supposed to give too much away. As the man said to his best friend when he found him in bed with his wife, "Bad dog! Bad dog!"