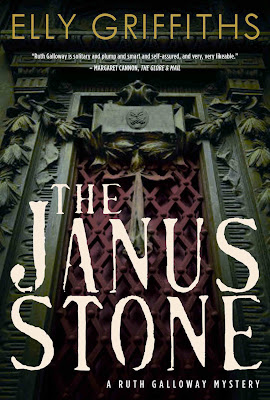 This crime novel is the second in the British Ruth Galloway series.

I had great expectations to this one as The Crossing Places was a wonderful read. And just as in her crime debut, Griffiths dishes up a wonderful Norfolk environment and the most compelling characters. Ruth Galloway is not your typical smart or slim detective but a competent and intelligent forensic archaeologist (a role model for female readers who are not exactly Hollywood material?) DCI Harry Nelson may seem taciturn and gruff, yet he is a sensible and likeable family father in his own way. These characters are not heroes or stars, but very real people you enjoy getting to know.

The story begins when Ruth visits a local archaeological site, and she is excited when Dr Max Grey, expert on Roman Britain and leader of the dig, shows her they have found some bones. Soon the body of a child is found beneath the walls of a nearby Victorian mansion, a former children´s home, which is being torn down to give way to modern flats. The plot has probably been a sacred place in the past so are the human remains old or new? Besides, the head is missing which makes Dr Grey suspect that the child may have been sacrificed.

As readers of the debut will know, Ruth is pregnant but determined to keep her baby even if she expects she will have to raise it alone. She thrives in her isolated house in the Saltmarsh though her pregnancy makes her more vulnerable than usual, a fact that the murderer exploits ruthlessly.

No need to spoil your fun by telling you more about the fine plot. I want more of this series – the sooner the better!

This ARC was kindly sent to me by Maxine of Petrona.
Indsendt af Dorte H kl. 12.39

Dorte - Oh, yes! I remember how much you liked The Crossing Places, and I'm glad you liked this one, too. This is an author I'm just going to have to get to know! The characters sound terrific and the plot sounds fascinating.

I love Kathy Reichs and have heard it said that if you like her books you should also like the works of this author. I shall search her out at the library I think.

This is a series I just may have to move up on my TBR list. I remember enjoying your first review and this one looks equally good.

Great review! Mine is on timer and will be on Petrona in a couple of days. I did like the book a lot. Even though the author writes in the dreaded present tense, it did not bother me. I hope she's writing another one.

Margot: ... and the environment is also perfect!

Kelly: oh, it will be interesting to see what you think about her books.

Maxine: I almost forgot that she wrote in the present tense this time which proves how well she writes. I am so curious to see your review.