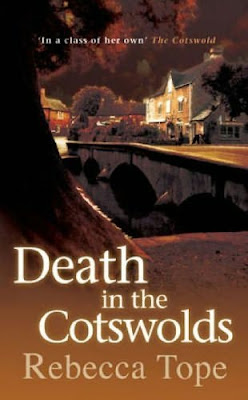 This British novel is the third in the Thea Osborne series but the first I have read.

The murder weapon was a novelty to me, and the idyllic setting is a small Cotswold village:

“I had wasted much of the day thinking about Phil and how it would be to have him across the street for a week, pottering about tidying my house when I should have been working in the garden, digging potatoes, picking up windfall apples for my pig. She was a very beautiful Tamworth, incidentally, called Arabella, living in a patch of old coppice I rented for peanuts half a mile away.”

Even though it is called a ´Thea Osborne´, the main character and first-person narrator is Ariadne, the local woman who lives across the cottage which Thea and her partner, Phil Hollis are staying in.

Ariadne lives alone with her independent cat and her beloved pig, spinning and knitting beautiful garments and scarves. She is the very enthusiastic leader of the local group of pagans, or wiccans, so when one of her few close friends, young Gaynor, is found murdered in Notgrove Long Barrow, a holy site used for pagan rituals, the police have to put her on the initial list of suspects. This results in a strained relationship with Phil Hollis who is not only Ariadne´s childhood friend, but also a Detective Inspector. As he was on the spot, he is put on the case, of course, leaving Thea and Ariadne to spend most of the week together, feeding Phil with useful bits of information about the villagers.

Though the motive did not seem very convincing to me, this was a fast, but really enjoyable read.

Dorte - Thanks for this fine review. I'm glad that you found it enjoyable, although I know exactly what you mean about a motive that might not be so very convincing. I always enjoy your reviews : ).

It's sad when they don't make the motive realistic but I think it's still a book right up my alley.

Margot: it *was* very cosy and I suppose that is the main criterion :D

Clarissa: I wouldn´t call it unrealistic, perhaps just a bit sudden, but if you like cozies, I do recommend it. It was really entertaining (which was exactly what I needed last week).

Not an author I'm familiar with, but it sounds like a fun series. I think I would really enjoy the setting!

Kelly: yes, it is just the right kind of village setting!

Just the title would have drawn me in. I love the Cotswolds and I love a cozy .... I'll be tracking this one down.

Beth: I am really happy that I bought two at once so I have another one ready on my shelf.