A Nightly Burger I 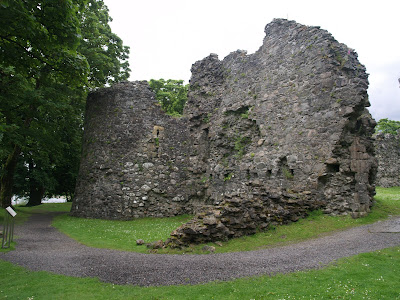 My head nearly hit the roof beams. A little boy in pajamas, holding a threadbare, one-eyed teddy in his arms, materialized right behind me. Where on earth did he come from? And why hadn´t I heard him?

“A burger! I thought p´raps you were burgering the house. Then I would have to wake up my daddy, wouldn´t I, and he would be SO cross!”

“Doing what?” He cocked his head and scrutinized me from head to foot while searching for something up his nose.

“Eh, that´s not so easy to explain.” I fiddled with the silverware and picked a few items which I put into my bag. If that boy had a proper mother she would surely see to it that he went to bed at night and stayed there!

Apparently he didn´t know when his company was unwanted. He climbed onto a chair so it was easier for him to see what I was doing in the top drawer of his parents´ antique bureau. “What are you going to do with them?”

”Why?” He didn´t look the least offended, just genuinely curious.

”Oh, because … well, because you´ll wake up your daddy, and he will be cross, won´t he?” A brilliant idea I had there. As you may have guessed, children are not really my thing. What did one do with them? Should I tie and gag him, or could I bump him on the head? Run off? Give up the whole blasted business for tonight?

He was quiet for a few moments, then he began whispering with his teddy. “Teddy says he thinks you are a teorist.”

“Of course I am not a terrorist, silly. What on earth makes you say that?” A drop of nervous sweat slowly trickled its way down my spine.

“Teddy says! Teddy says terrarists wear gloves and those tight things over their heads.” He held Teddy up in front of him as if trying to hide behind the ugly thing.

“Oh come off it. Where is my bomb if I am a terrorist?” I was quite impressed by my own logic in a tight spot. Perhaps I could still worm my way out of this fix.

To be continued on Saturday - my computer permitting.
Indsendt af Dorte H kl. 14.30

Hi Dorte,
This story is great! If I remember, I'll be back to see what happens. Glad to hear the sticky note worked. And I joined in on your competition. Have a great day!

You have me intrigued ... waiting for Saturday!

Sherrie, you are welcome! And I am so glad you like my story.

Cathryn, I am keeping my fingers crossed, but today my computer is mail-less and Word-less :(

I feel quite isolated so it is good that I can visit people´s blogs at least.

Great story! I'll tune back in on Saturday for its conclusion. (I love it when stories are written from the bad guy's POV.)

I love the playful feel of this one, and the title! I hope your computer lets you post the next installment on soon.

I thought you were a nice person, not a burger and a teorist.

Wow! I'll be back tomorrow for part 2. Here's hoping your computer permits it.

Elizabeth: yes, it is quite fun playing really baaaad for once :D

Ann: oh, did I forget to tell you? (but these days it may be just as well I have established that I am NOT a terrorist)

Petty: well, I have a backup just in case, but it does make things more complicated.