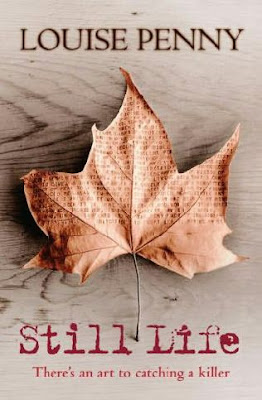 This Canadian novel is Louise Penny´s debut, and the first in the cozy Armand Gamache series.

The story takes place in the village of Three Pines. “Three Pines wasn´t on any tourist map, being too far off any main or even secondary road. Like Narnia, it was generally found unexpectedly and with a degree of surprise that such an elderly village should have been hiding in this valley all along. Anyone fortunate enough to find it once usually found their way back.”

But one day evil strikes in this little paradise, first when young hoodlums assault the queer owners of the local Bistro, later when 76-year-old Jane Neal, retired teacher and amateur painter, is killed. The villagers are shocked, and even more so when they realized their dear friend must have been murdered because she had decided to invite them all into her home for the first time ever.

No more about the plot, but Penny deserves much praise for a well-arranged plot teeming with old secrets and a number of rather convincing villagers, for better or worse.

The protagonist is Chief Inspector Armand Gamache, happily married, very successful in his career and a great judge of character. And here comes my only problem with Penny´s series: Gamache is simply too good, kind and forgiving to be true, and his nasty little piece of an agent, Yvette Nichols, is too stupid, unpleasant and persistently loathsome.

Will I read more? Yes, certainly – keeping my fingers crossed that one day Louise Penny will make Gamache as credible as her other characters.

See my review of the third in the series, The Cruellest Month.
Indsendt af Dorte H kl. 13.53

You make an interesting point, Dorte, about believable sleuths and agents (and other characters). I much more enjoy human charcters who are neither too good nor thoroughly evil. People are too multidimensional for that to be realistic.

I don't mind Gamache being so saintly :-)

Care, she is this type who makes one error after the other, often errors of judgment, but she is always convinced the fault lies somewhere else.

Margot, when I was seventeen I absolutely adored Lord Peter Wimsey who is nearly flawless, but times have changed and so have my tastes :D I like re-reading Sayers´ books, but I don´t think modern writers should try to imitate the 1930s.

Kerrie, I know you love this series more than I do. I also enjoy the setting and all the other characters who seem quite real and convincing to me. But I don´t quite understand why a modern writer has created this icon. It is not even sensible for a leader to turn the cheek every time. Sometimes he jeopardizes the investigation because Nichols cannot be trusted.

I have wanted to read Penny for the longest time but never knew which one of her books is the first in the series. Thank you for clearing that up. Now I can safely start reading this author.

You know, I felt that way about Gamache, too. And his horrid agent. Thought it was just me. The rest of the book is delightful, though.

Lilly, I hope you are going to enjoy it, and I am looking forward to hearing what you think.

Elizabeth, I agree one hundred percent. A great series with two annoying characters.