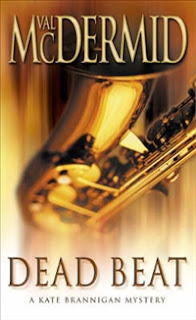 This book is the first Kate Brannigan mystery.

The first line: “I swear one day I´ll kill him. Kill who? The man next door.”

Not so unusual in a crime novel, perhaps. But the man next door is Kate´s lover, the rock journalist Richard Barclay. Kate likes the man but she also cherishes her independence which means she is in for a lot of training before her guy is perfect.

When Kate is not busy perfecting Richard, she is one half of ´Mortensen & Brannigan´, private investigators in Manchester. In some ways she may be compared to Sue Grafton´s strong and independent sleuth, Kinsey Millhone.

Kate is employed by the famous rock singer Jett to find his former songwriter Moira Pollock. Missing persons is not her favourite case but she takes it on for the money, and at some point she realizes that ... far more interesting and dangerous than she had imagined.

Though Kate´s home base is Manchester, the case takes her to Leeds and Bradford, and the narrator deftly makes the cities come alive:

“The short drive from Leeds to its neighbouring city of Bradford is like traversing a continent. Crossing the city boundary, I found myself driving through a traditional Muslim community. Little girls were covered from head to foot, the only flesh on display their pale brown faces and hands.”

This novel is a traditional private detective mystery of the very best kind. I bought it myself.
.
Indsendt af Dorte H kl. 10.00

Dorte - A fine review! I really like the traditional PI mystery, too, so I'm very glad you profiled this one. I hadn't really thought of the comparison between Kate Branigan and Kinsey Millhone, but I can certainly see your point.

Although I didn't dislike the only Val McDermid novel I read, you've assured me others are far better. I believe this would be a good one to start with.

Margot: the similarities between Kate and Kinsey did not strike me immediately, but I think readers who like Kinsey will also like Kate.

Kelly: McDermid´s novels are very different. Her Wire in the Blood series is good, but downright scary. I have reviewed two stand-alones which are excellent thrillers (real page-turners). This series is a very fine PI series; entertaining and not too far from the best cosy mysteries. So I admire her for her ability to write so well in so many sub-genres.

It's been fun reading your blog so thought it was high time to pop in and say hello.

I've been thinking of reading a Val McDermid for some time, but I'd heard they were not for the faint-hearted. I'm squeamish. :) But your review has given me hope. I really like Kinsey, so I think I'll like Kate.

Thank you for the review.

Nice to meet you!

I almost gave up on McDermid because her series featuring Tony Hill and Carol Jordan was so graphic. Then good friends recommended some of her stand-alones. I read "A Darker Domain" and "A Place of Execution" and loved them both. Captivating thrillers, but not nearly as gory as that series. And now I have tried the first Kate Brannigan which isn´t gory at all.

Sorry for my late response. :)

Thank you for the recommendations. I've noted them down. I love thrillers but not those gory one's. I have nightmares! :(

Joanne: it is quite okay to have a blog-free life also :D

Thanks for the review. I just bought this one and Kick Back with Kate Brannigan, and Killing the Shadows with professor Fiona Cameron, so I'm happy I didn't buy rubbish :-)

Søren: for readers who only like brand-new, fast paced thrillers, this one might be a disappointment. But for readers like you and me who don´t mind older, quieter crime mysteries, Kate Brannigan is a fine series. I plan to buy more of them, but I don´t want to read them right after each other.

I read your lips:
- a bit quiet
- don't read all of them right after each other.

Søren, it really wasn´t meant negatively. I´d give it at least three stars, it is just not the same kind of punch in the stomach as McDermid´s latest stand-alones. She has *never* been bad, but she is the kind of writer who keeps demanding a lot of herself.

I know. You were precise, and I think I understand. I still very much want to read her books :-)