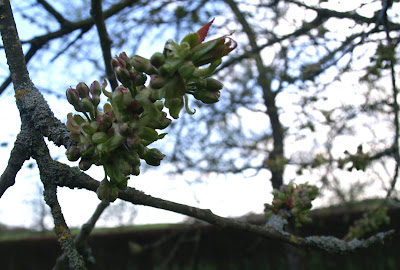 The task: write a hot text without using the word or synonyms for it. Remember the principle show, don´t tell.

Hardly had she heard the sound of Arnold slamming the door, before she threw the grubby linen in the laundry basket together with her sensible cotton nightie, and put crisp, cool satin sheets on the double bed. A skimpy scrap of silk slid down over her curvaceous figure, her fingers ran through her blonde curls and she had just time to slip back in bed before he rang the bell.

“I am right in here, officer.” Her husky voice crept round the door like a quivering jazz improvisation. “You can leave your shooting iron on the dresser.”

”Are you the little missus who called for help?” He tripped over the threshold with his trousers round his heels and his tongue flopping in his trail. There was no time for sophistication today. She scratched him with her long nails, inhaling whiffs of testosterone while he prowled and prodded, sending his fingertips on an expedition through undulating territory in search of unchartered areas. Like succulent buds they romped between the sheets until they finally lost it and drifted over the edge on a wave of salty sweat and surreal rays of sunshine.

She put him through his paces until he deflated like a threadbare tyre. He opened his mouth, but she held a crimson fingertip to his savaged lips. He was so gorgeous in all his hairy, muscular glory that she wanted to preserve the illusion yet another moment.

”Go and get me a cool drink, will you, Tarzan.” She wafted him out of the bed, determined to keep her oasis of golden, shimmering haze to herself.

Did he really have to trample around like that? Had he lost his way between the bedroom and the fridge? She wasn´t hit by the truth until the crack penetrated her smug self-satisfaction. Through a red drizzle she saw Arnold standing in the doorway, pointing at her.

Wow, Dorte. For some reason your story comes across great in English - I guess Barbara Cartland hasn't lived in vain.
For some reason Danish is a funny, sometimes embarrassing language in whihch to write such scenes. I tried to find a single mistake or something to criticize ;o), and the only thing that comes to mind is a question: Shouldn't it be: "on a wave of salty sweat"...?
Don't ever show this version to Asgaard. He might rotate on the spot before blowing up like a balloon filled with too much hot air...

Hi Dorte.
By mistake I made my comment with an old Google profile. For the sake of good order: I'm Skovbakke.
(and to set another record straight: I do know how to spell "which"...;o))

Care: Weeell, I wondered if I had stepped on any toes by posting this on my blog. It is an exercise from my writing course, and the Danish students all thought it was hilarious so I took a chance. I am glad it didn´t scare you away :)