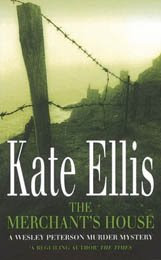 The book is the author´s debut and the first in the Wesley Peterson series.

The story begins with any mother´s nightmare: a little boy disappears from the front garden. Next the skeletons of a woman and a baby are found among the remnants of The Merchant´s House, a sixteenth century building, by some archaeologists. Third, a woman walking her dog comes across the body of a young woman. And voila, the scene is set for a great crime story.

The story takes place in quiet ´Tradmouth´, Devon. The protagonist is DS Wesley Peterson, “smart, tall, dark brown face, pleasant and intelligent”, who studied archaeology before joining the police force so he prefers his bones dry. He has just moved to Tradmouth, and enjoys the change from London, but is forced to realize that he has brought his marital problems with him.

Wesley is even fully equipped with his own Dr Watson in the shape of Neil Watson, archaeologist and fellow student of Wesley. Neil is very engaged in solving the story of the old skeletons, and obviously enjoys working together with his old friend.

Apart from the modern crime story we get some journal entries, written by John Banized, the merchant of the story, in 1623. A good way of giving the reader some background knowledge for the old case, but the only minus in this really fine debut is that nothing much happens in the first many journal entries.

A recurring theme is parents and children (wanting them, having them or losing them), and the crime case is well planned and carried out all the way through, with nice little tidbits scattered over the pages, together with the very convincing descriptions of the characters.

NB: if you should be looking for Tradmouth, you´d better try this blogpost instead of consulting your maps.
Indsendt af Dorte H kl. 13.38

I am pleased Kate's alternative Devon kept Neston [Totnes] one the most alternative places you can find.

I can assure you I would love to go there and look for myself. And I probably will one day.

Great review! I came across a set of Wesley Peterson novels last year, and loved them so much, I ended up hunting down all my library's copies. You've reminded me there are a few still outstanding on my list.

Nice review! I'll have to looking into this.

Thanks Ms Bookish. He is certainly also on my wish list.

Beth, it was Cathy who recommended the series - and I am sure you will not resist this double temptation.

I have enjoyed the Wesley Peterson books I have read (out of order, regrettably)though 'The Armada Boy' - the last one I've read - I found the links between past and present less than convincing in places. But I generally look forward to them!

Hi Steph.
This process of reading in order is something I hardly thought about before I began blogging, - probably because my memory is so bad it doesn´t matter much.

The past story was rather good in this one I think, it was just the journal that was rather repetitive. And I´ll certainly also keep Kate Ellis on my list.