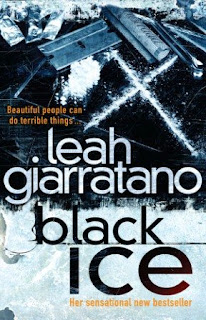 This Australian police procedural is the third in the series about detective Jill Jackson. I won it in a competition on Kerrie´s blog: Mysteries in Paradise

One of the main characters is Detective Sergeant Jill Jackson who works under cover among the drug dealers of Sydney while her younger sister, Cassie, is in free fall from a carefree existence as a model to a serious dependence on drugs, and on the generous lawyer who is more than willing to supply it to beautiful women.

We also meet Seren whose happy childhood ended when her violent stepfather entered her life. When the story begins, Seren is released from prison after more than a year for possession of drugs. She can resume life with her little son, Marco, but the odds on parole are tough, and she struggles with her two priorities: making Marco safe and happy again, and taking revenge on the man who is to blame for her sentence in jail. The reader suspects that the three women will meet before or later, but under which circumstances, and how much will go wrong before the drug dealers can be stopped?

The story is very well-written, and the characters and environment are very convincing indeed – perhaps almost too convincing. One of the reasons why I have found it difficult to finish this novel is that life is treating young Seren so unfairly. So this is the kind of book where women are victims, and when they are involved in crime, there is always a male scoundrel behind. Cherchez l´homme.

Where is your limit?

I know several readers of crime fiction who don´t like too graphic and detailed descriptions of violence.

I know many other readers who don´t like reading about serial killers or torture of women. I can cope with most of those books as long as we do not enter the mind of a psychopath.

But of course I have an Achilles´ heel: for example very realistic descriptions of women in distress or people who are depressed. If I read too many books of this kind, they begin to get to me no matter how well-written they are.


Where is your limit? What gets to you, and are there things that can make you put down a book?
Indsendt af Dorte H kl. 10.00

Dorte - You ask a very interesting question about limits. We all do have them. Some of the things that get to me are gruesome things happening to children, and depictions of gore that get too detailed and graphic. If the rest of the story is excellent, I will read the novel, but I find those things hard. I don't like books that spend too much time on what's sometimes called torture-porn, either.

I went through a period where I read many "serial killer" novels that were often quite graphic. I would usually have to alternate them with lighter cozies or Christian fiction.

In fact, no matter how much I love a genre, I alternate in order to keep from "burning out" on a specific type.

Personally my approach to writing violence is to describe it as minimally as possible and leave the reader's imaginations to fill in the gaps. I think readers will imagine far worse than what I could effectively describe.

The other violence I struggle with reading is anything directed against children.

No internet from home - I will be back.

Thank you for your comments

Rampaging sexism that no-one finds even vaguely objectable tends to irritate me more than anything else - that and the "all men are stupid" genre which sometimes turns up. (Veit Heinichen, a German author whom I otherwise enjoy reading, does this sometimes - just because you set books in Italy doesn't mean you have to lay the gender stereotypes on with a trowel!)

Lauren: really good point! Even though you may have to use characters who are prejudiced, there are several ways of letting your readers know you don´t sympathize with the views of such characters.