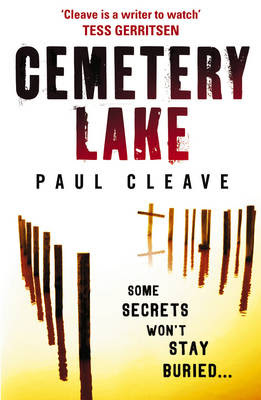 This thriller from New Zealand is the author´s third. I chose this one for the title because I wanted one I could use for both my reading challenges.

The novel is well-written and captures one´s attention immediately (though it is written in the present tense), just as there is a nice streak of (dark) humour.

It begins when private investigator Theo Tate watches the exhumation of a grave. While waiting for the coffin of Henry Martins to resurface, he and the diggers see three bodies rise to the surface of the lake nearby. Later it turns out that the body in the coffin is not even the one that should be there.

Theodore Tate is a former police officer who lost his little daughter and nearly lost his wife to a car accident (a drunken driver) two years ago. He soon gets personally involved in the case, partly because he cannot help feeling that if he and his colleagues had done a better job two years ago when Henry Martins died, they might have prevented the murders of four young girls.

The plot of this somewhat dark thriller is exciting and unexpected, and even though the protagonist is not always very likeable and sometimes hits the bottle at the wrong moment, the reader gets to know him and to understand his flaws to some extent.

I found the middle part less convincing than the rest as there are a few chapters which are more like Greek tragedy than real life, but after this lapse, the ending turned out to be very satisfactory.

If you want to know something about New Zealand crime fiction, Craig´s blog Crime Watch is the place to go.

Dorte - Thanks for this review. Like you, I've heard good things about Paul Cleave. In fact, his first is on my TBR list. This might just go there, too : ).

Thanks for your review Dorte. I have Paul Cleave in my list of next adquisitions. Maybe I can use it for next year Global Reading Challenge.

I like some humour in my crime novels, it lightens the plot a bit I think. Then again it could just be my English love of 'gallows' humour.

Margot: he is a bit noir, but he writes well.

Jose: what a good idea! Not that I have thought about next year yet, but people seem to enjoy the global reading challenge so I will probably have to continue it.

I'm a fan of "dark humor" myself, so this one sound quite good!

Happy Easter to you and your family, Dorte!

Thank you, Kelly, and the same to you!

It is not only the humour that is dark in this novel, but I don´t think he is overly graphic.

Good review Dorte. I'm glad you enjoyed the book - I was a little worried it might have been a touch too dark for your tastes - so I'm glad you could appreciate the storytelling anyway.

In hindsight I agree about the middle lagging a little, but that overall it's a very good book (I think that was why I gave it 4 stars for Good Reading, rather than slightly higher). I was wondering how he was going to pull it together with a satisfactory ending, but he manages it in a fresh and organic way, I think.

Thanks for giving some Kiwi crime fiction a go. Hopefully you might try some more in future. Cleave's next book, BLOOD MEN (which has a cameo from Tate) is out in the Northern Hemisphere mid-year.

Craig: I certainly enjoyed the book! And I suspected it would be rather dark. That is not my favourite sub-genre, but I read one once in a while, and as long as the author writes well and they are not too graphic I do appreciate them.

And it was only natural to try a Kiwi novel as I had already read a few Australian ones.