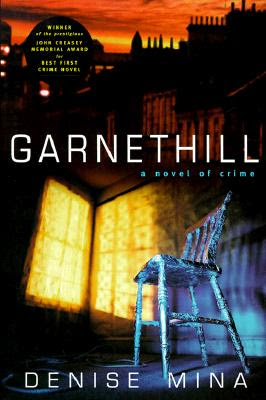 This Scottish debut is the first part of a trilogy about Maureen O´Donnell from Glasgow.

“When she first met Douglas she knew that this would be a big one. His voice was soft and when he spoke her name she felt that God was calling or something. She fell in love despite Elsbeth, despite his lies, despite her friends´ disapproval. She remembered a time when she would watch him sleep, his eyes fluttering behind the lids, and she found the sight so beautiful that it winded her. But on Monday night she woke up and looked at him and knew it was over. Eight long months of emotional turmoil had passed as suddenly as a fart.”

Even though Maureen has come to her senses after a hectic affair with married Douglas, she receives a nasty shock when she finds him tied to a chair, brutally murdered, in her own living room. Maureen came home very late and very drunk the night before so she did not even notice the body until the following day.

Of course the police suspect that Maureen or her drug-selling brother Liam may be behind the murder. Maureen who has a past including abuse and a mental breakdown seems shattered, but it soon becomes evident that the young working-class woman has hidden resources, especially when she conspires with her energetic friend Leslie.

This novel was another first-class March discovery. I enjoyed the wonderfully crafted characters (especially Maureen and Leslie), the credible working-class setting, and the fine plot. Furthermore, Mina writes well and adds a nice streak of humour even in the darkest scenes.

I bought the trilogy myself, and I am looking forward to volume two and three which are waiting for me on the shelf!
Indsendt af Dorte H kl. 11.00

I see Denise Mina popping up everywhere in the blogosphere and everyone has a great opinion. I really have to read the books. I might even start with Garnethill as you make it sound very interesting.

Dorte - Thanks for this excellent review! I especially like the way you focus on Maureen's character - it's deliciously complicated. I, too, like the friendship between her and Louise, as well as the humor, so I'm glad you mentioned those.

Lilly: I have had her on my shelf for a long time (with many other good books), but my daughter read it, and afterwards she devoured volume two and three so I knew that here was something really good!

Margot: I am really impressed by the Scottish crime writers right now. And I don´t think one could write a proper review of Garnethill without mentioning Maureen. She is one of those characters you wish you had created yourself.

I loved Marueen too. You've reminded me that it's time to buy the second book - I was hoping it would pop up for me at bookmooch but that was not to be.

Bernadette: I have had the second for a long time and I am halfway through it. My daughter read no 1 and 2 in March so I knew I would have to get the third for her. It is ready on my TBR now.