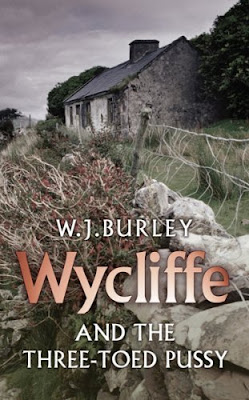 This British police procedural is the first of twenty two about Superintendent Wycliffe. I know the series from Danish television (Wycliffe 1994), and when I saw a recommendation of the books on Martin Edwards´ blog, I bought the first one.

Beautiful ´Pussy´ Welles with the one deformity is found dead by shooting. She was young and seemingly popular, at least among the male population. Soon one of her lovers is suspected of the crime because he was around and owned the murder weapon. Wycliffe arrests him but doubts that the case can be so simple as it seems that Pussy actually suspected she would die. How could she know, and why didn´t she try to escape? A well-planned plot which may truly be called a puzzle.

Superintendent Wycliffe is an engaging and competent protagonist who ´dislikes order and discipline´ but joined the police to fight crime and escape from the family business. As the first one was written in my remote childhood, we are not told much about his private life, yet he comes across as an interesting person.

I think any lover of traditional, British police procedurals with a strong sense of place will enjoy this Cornish series, and I am strongly tempted to buy them all. 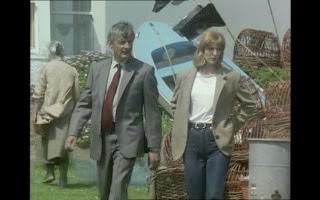 Dorte - I'm very glad you featured a Wycliffe novel. As you say, they really are well-done police procedurals, and I don't blame you for wanting all of them.

Margot: it was a pleasure to read it so I think I will try some more of them. I have also tried a few Barnaby novels because I like the TV series so much, but the two Danish books I have read struck me as boring and not at all well-written. I don´t know if it is because of the translation so perhaps I should also try one of these in English.

Dorte - I know what you mean about translations. I hope it was just that (perhaps because I like the Barnaby novels very much : ) ). I'll be interested to hear what you think when you get the chance to try one in English.

I'm not familiar with this series, Dorte...I'll have to look for it. I think it's an interesting premise--why *wouldn't* you escape if you knew you were going to die? I'll find the book, thanks.

Dorte I haven't read any of the books [very remiss of me] but the TV series was very good as it was set in the beautiful SW of England.
The fictional Wycliffe was a member of the Devon and Cornwall Constabulary, and the real life police Detective Superintendent who was the script adviser for the program was a patient of mine.

I read a lot of these in the 1980s and enjoyed them very much. I didn't see the TV series though I like Jack Shepherd, who seems from your picture to be playing Wycliffe. I think you might be able to get a DVD box set cheap on Amazon, so will check it out. (When would I have time to watch it, though?)

Elizabeth: I think you´ll like Wycliffe. I have almost made up my mind to try some more.

Norman: we enjoyed the series very much so when I saw a post about the books on Martin´s blog I knew I would have to try them. How funny that you have met the ´real´ Wycliffe.

Maxine: I have considered buying them. Or more precisely, my husband has. But he is not certain he will get enough out of it without Danish subtitles. Jack Shepherd was a great protagonist.

Despite being a Wycliffe fan, it's a very, very long time since I read this one. Glad you enjoyed it.

Pardon me for saying this, but the title alone is sufficient provocation to make this a "must read" addition to almost anyone's reading list. Thanks for sharing it.

R.T.: opinions differ. My very young daughter read it, but I think she saw the title as a bit embarrassing :D
(It also made me curious).

First, the cover (I'm shallow) is love at first sight! But this does sound like a must read. I'm not buying any new books this month, but come March...!

Beth: I thought you would like this one. I bought it online so I didn´t even know I got such a delicious cover in the bargain. Very British!

I remember seeing the TV series. A search on dansih libraries came out negative. Not one book, in danish og british, by J.W. Burley.
Lots of the on Amazon, UK, so that should not proove a problem. Found the author's home page, and found it very interesting, especially by learning that Burley's was a great admirer og Simenon's Maigret and very highly inspired by the books.
Read all about it!
http://www.wjburley.com/

Sorry Dorte, found Burley on the library at last, so please leave out first sentence, thanks

I cannot edit comments, only publish or reject them.

I am glad you found Burley. If you like traditional British crime, you should also enjoy this one.

I think I've got them all. Books, that is. And I was obsessed with the television series, and still have many episodes on video. How old-fashioned is that?

Ann: As you have them all, I suppose he keeps up the promises of the first? I really must order some more.

If I had any of the television episodes on video, I would certainly keep them. I have 50 video tapes in our ´library´. The only problem is that someone has thrown away my list of what is on them so it is like buying a lottery ticket :O

I finally got around to reading this one, Dorte. Thanks for the pointer, I think it's wonderful. I was surprised to see that it was written in 1968 - often books from that era are dated, but this one doesn't suffer from that at all. Nice psychological side to it too.

Tim: it is always great to hear that my readers like the temptations I share with them.