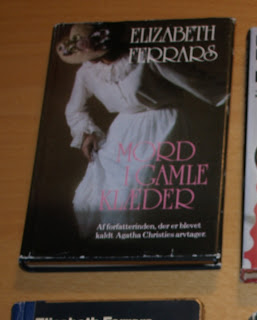 I could have chosen a living Scandinavian author for the letter F in the ABC meme, but I foresaw that one of the other participants would write about her.

Instead I have selected Elizabeth Ferrars, a British writer whose real name was Morna Doris MacTaggart Brown. She lived from 1907 to 1995, and she was a prolific writer who produced more than seventy novels during her long career.

I have only read six, a random selection found in second-hand bookshops, and of these I would like to recommend my personal favourite The Pretty Pink Shroud, published in 1977.

A woman disappears after a fancy dress ball, and the pretty pink costume she wore appears in the local thrift shop, torn by a bullet. Intriguing, don´t you agree?
Do you know Elizabeth Ferrars? 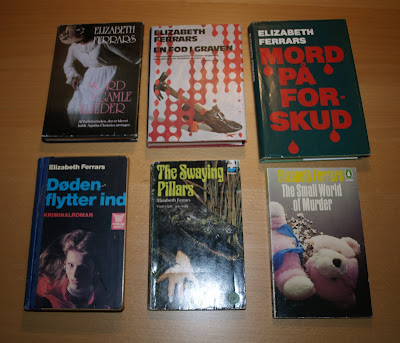 Thank you for all your votes and recommendations!
Without impoverishing my family completely, it should be possible to buy the books with five and three votes:

I'm *not* familiar with her! But now I'll have to go find her books. Thanks for the tip, Dorte.

Dorte - One of the things I love about this community meme is the opportunity to hear about authors I haven't tried; Ferrars is one of them. Your little "teaser" is quite motivating!!!

Good choice! I have read quite a few Elizabeth Ferrars in the distant past (from the library), and recall enjoying them. But sadly, I can't remember them at all.
Enjoy reading your booty!

The pretty pink shroud - sounds like a title you would have picked for one of your short stories.

Margot: yes, that is true, via memes and via our friend feed room in general!

Maxine: thank you. I think she is a fine writer, and I like picking an older, more unusual writer sometimes. And I just sent my order off this afternoon - so now it is just waiting for the postman :D

Petty Witter: yes, I think you have a point there! You are getting to know me :D

I don't ever remember reading even one by her Dorte. Thanks for the tip. (Do I really mean that when I have far too many books to read now?) My library unfortunately (or fortunately depending on your point of view) has 39 titles. They list her as Elizabeth X. Thanks for taking part in the alphabet crime fiction meme.

Ah, yet another name to add to my "must read" author list. Thank you, Dorte, for expanding my mystery fiction I.Q. by highlighting Ferrars.

Kerrie: all I can say is don´t read all thirty-nine one after the other. She is good, but not THAT good :D

R.T.: oh, I always feel very well-read when I have discovered an author before you. I wish someone who knew her better than me could recommend a handful of ´vintage Ferrars´ because with plus 70 books they are probably not all of the same quality.

I read quite a lot of Ferrars perhaps thirty years ago and sometimes think of revisiting -- the problem is that there are so many significant new novels to keep up with. I thought of her recently, in fact, when Kerrie had a post about E.X. Giroux. There could have been confusion for some in times past, for Ferrars was published as E.X. Ferrars in the US, this at a time when it was thought male writers sold better and so femininity should best be disguised. Anyway, I do remember her as a very good crime writer not at all given to the formulaic. Bit of trivia for Maxine to end with: she was married to Robert Brown, distinguished botanist who was, I understand, responsible for putting Edinburgh on the academic map in that field before his retirement in 1977.

I read her long time back. So much so that I had forgotten about her.

Philip: I am afraid some female writers still think (experience, perhaps) that it is easier to sell books if you do not flaunt your first name.

Do you remember any particularly fine Ferrars stories, by the way? (It would make it easier for curious readers to try her if they knew where to begin).

Gautami: I don´t remember all the stories by her that I have read, but on the whole I think she writes and plots really well.

No, I haven't read any Ferrars. Yet another new to me author. Thanks!

Louise: do steal anything you like! You are very welcome. It is an easy type of post, and it often works well.

Beth: you are welcome!

Dorte, it has been a long time, but I may mention three: I Said the Fly, which is especially fine, and then Neck in a Noose and Foot in the Grave, both very good indeed. She was a very reliable writer up to the very end -- she was especially prolific in her 80s with no sign of decline. If her books were graded out of ten, I should say none of her oeuvre deserved less than seven, and there were an awful lot of nines.

Philip: yes, I know they are old, but I thought you would remember some of the gems. Thank you for your recommendations!