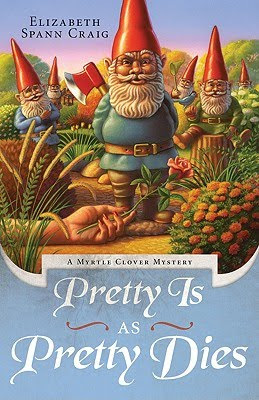 [Denne underholdende krimi er desværre ikke oversat til dansk]
As the first novel in this American series is out of print, I had to settle for the second so this is my very first impression of Myrtle Clover, an octogenarian protagonist:

“An unwelcome glimpse of herself in a shiny, copper kitchen pot revealed an Einstein-like image scowling back at her. She patted down her wispy poof of hair into a semblance of order and squinted at the rooster clock hanging on her kitchen wall.”

Myrtle Clover is just one of many victims of Parke Stockard, busybody and pocket dictator, who seems to be taking over everything from the flower arrangements of the church to the columns of the Bradley Bugle. As if that isn´t enough, the woman openly flaunts her beauty! She shouldn´t have done that, and of course she does not live to regret it.

Myrtle, a retired teacher and the mother of the local police chief, may seem a tiny bit on the bossy side herself. Retirement in sleepy Bradley is so boring that she has to stick her nose in everything criminal going on, keen on beating her son to solving the murder - and proving she is not rest home material yet.

In an effort to keep Myrtle peacefully preoccupied, her son signs her up for voluntary work in the church. Furious, she pays back immediately by dragging out her large army of ceramic gnomes, displaying them in the front yard, a real eyesore to her son and daughter-in-law who live across the street.

If you like your mysteries cozy, you´ll love the small-town environment, laugh at the committee ladies and recognize their ridiculous squabbles along with Myrtle´s merciless murder-hunt.
Indsendt af Dorte H kl. 15.14

Ah, the gnomes! Tell me, are gnomes part of Danish culture? Or am I confusing Denmark with some other European "home of the gnome"?

R.T.: both yes and no. Garden gnomes are not, but ´julenisser´, Christmas goblins or gnomes, certainly are. They are probably more common than Santa as part of the commercial Christmas.
They always wear red hats, and they are dressed in red and grey.

Ah, but what of the real gnomes? I mean the absolutely real, living-and-breathing gnomes of folklore. If they are not in Denmark, then surely someone who follows your blog will be kind enough to weigh in with the solution to the mystery: Where are the gnomes?

Oh, but there are plenty of gnomes in Denmark (and Norway and Sweden I dare say)! They live in the countryside, on lofts and other dark, quiet corners.

You´d better treat them well, especially around Christmas when they expect plenty of rice pudding, or they can play really nasty tricks on you.

Thanks so much for featuring "Pretty is as Pretty Dies" today, Dorte! I was so excited to see my text in your teaser the other day. :)

Well, that helps to clear things up a bit. Lofts and dark corners, you say.? That seems reasonable as it leaves the extra special hiding places under the bridges for the trolls.

When I lived in Iceland (for a year and a half), I never heard anyone mention gnomes or trolls. Perhaps the North Atlantic was a barrier to migration.

Gnomes in America, unfortunately, have been relegated to TV commercial status where they appear endlessly as mascots for an online travel agency. And so, American children probably know only the "Roaming Gnome" of televsion's 30-second blurbs rather than the "real" things in folklore.

Elizabeth; I am glad you appreciated my teaser. I thought your book was too new to be generally known in my circles, but the other book I was reading this week is brandnew in English so ...

It was a pleasure to read it. My daughter has not quite finished it yet, but she said the other day that she liked Myrtle. She was not so sure about Red who should let his mother live the kind of life she wanted :D

R.T. Gnomes in Iceland? They heard the name of the country and decided to stay clear of that place ;)

They may have tried Greenland, though ... sounds more promising, doesn´t it?

Well, as you probably know quite well, Iceland (with plenty of wind swept green hills and valleys though very few trees, and with relatively low accumulations of snow but an atrocious winter wind) and Greenland (with much more snow and ice than Iceland could ever endure) deserve to swap names.

Now, what all of this has to do with Craig's novel is beyond me, but it is an entertaining diversion. Thanks for tolerating it.

THis sounds interesting Dorte. I can see it on the Book Depository and am tempted. Pity the first is out of print

Becoming a follower of your blog was an interesting experience Dorte, as my Danish is so poor! Translating the instructions used a lot of guesswork, but I seem to have managed ok

R.T. It is a pleasure to share folklore with you. With regard to Greenland & Iceland I remember quite clearly what I thought about the places when I was little, and how confused I was when I learnt a bit more geography :D

Kerrie: It is a great cozy, and Myrtle is a very real character! Much more realistic than most protagonists.
And you have succeeded in becoming a follower, but you really didn´t have to. All my ´old friends´ will get their points just by entering the competition, of course.