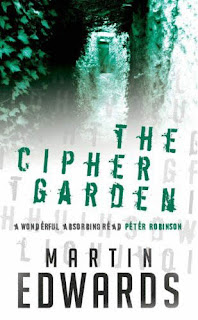 Martin Edwards on the theme ´Crime for All´. Review of The Coffin Trail.

“For so many years, to hold the scythe in his hand had made him feel strong. Powerful. The blade could not betray him now. Yet it had such a wicked edge… ´You´ll never do it.´ It might have been a prayer, but he made it sound like a dare. The blade fell and for a split second he understood his mistake. When the metal sliced against his flesh and pain bit into him, he screamed.”

This novel is the second Lake District Mystery. On the first pages we learn how the unfortunate landscape gardener Warren Howe is murdered with his own scythe. He is an unpleasant, middle-aged man who has been busy sowing his wild oats for far too many years, but even though the police have plenty of suspects they are unable to prove that any of them actually hated Howe enough to kill him. Thus the case is taken over by DCI Hannah Scarlett and her cold case team some years later when the police receive an anonymous letter claiming that Howe was killed by his own wife.

Historian Daniel Kind still enjoys delving in the layout of his unusual garden and his father´s life – is that why he thinks of Hannah, his father´s former colleague, so often, wishing she would call him? Apart from sticking his nose in her case, Daniel is on the track of the couple who built Tarn Cottage a hundred years ago and died on the very same day ´of broken hearts´.

Meanwhile Daniel´s girlfriend Miranda claims she is happy to share life with him in the countryside, but perhaps the lady doth protest too much in between running off to London for lunches with publishers who are interested in her lifestyle articles.

It takes time for Hannah to crack this case as the circle of suspects are wont to keep their little secrets to themselves. Consequently another person must die before Hannah succeeds in pinning down the murderer so she doesn´t seem to mind Daniel´s inclination to play the amateur sleuth.

The Cipher Garden is an enjoyable and convincing crime story with added pleasures in the form of the wonderful Lake District environment and the likeable main characters. Lucky for me, I have number three in the series, The Arsenic Labyrinth, ready on my shelf.

See another review on BooksPlease here.

Dorte - Marg at Books Please recently had a review too
http://www.booksplease.org/2009/04/18/book-review-the-cipher-garden-by-martin-edwards/

Thanks, Kerrie.
I´ve added a link.

I tried ordering The Coffin Trail on amazon. They were very sorry, but they had none, and weren't going to try...

Right now they seem to have 5 in stock from various sellers.

Good luck; it is a great series.

Hi Dorte - good to meet you. Thanks for the link and I'll add one to mine.

I know you'll enjoy The Arsenic Labyrinth - it's another great read, which I wrote about at http://www.booksplease.org/2008/12/10/the-arsenic-labyrinth-by-martin-edwards/

I'm very grateful indeed for the generous review, Dorte (and for that by BooksPlease). You can imagine it is frustrating that, the UK reprint of The Coffin Trail having sold out, there has as yet not been a further reprint, but I am in discussion with the publishers about this, and hope that something will happen soon! In the meantime, thank you all so much for your interest in my books, which is really good for motivation and morale at a difficult time for many writers.

Martin, I have certainly not said a word I didn´t mean :) On the contrary, I was afraid my post would not really seem ´inspired´, because I am quite busy right now (participating in a writing course, actually).
I have never had reason to think about who might read my reviews before as it is a new experience for me to ´know´ an author, but knowing myself I think I would rather NOT review a bad book written by a friend than write an untrue or unkind post.

I've enjoyed this series, too, Dorte, even though they can be difficult to locate. (I'm a very stubborn person though!)

Cathy, maybe I should begin to track down his earlier series? - they might turn into collectors´ items after all our positive reviews :D

You bet I´m stubborn too. The longer I read your blog, the more I realize how much we have in common.