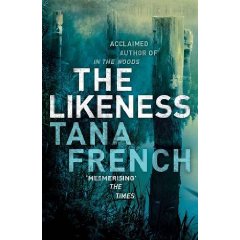 This thriller is the Irish writer´s second novel featuring Cassie Maddox. See my review of her debut, In the Woods.

As I have read this one for the Ireland Reading Challenge, I thought the quotation below was very suitable. Besides, the setting (the Georgian Whitethorn House in Wicklow outside Dublin) is fairly important for the story:

“This country´s passion for property is built into the blood, a current as huge and primal as desire. Centuries of being turned out on the roadside at a landlord´s whim, helpless, teach your bones that everything in life hangs on owning your home. This is why house prices are what they are: property developers know they can charge half a million for a one-bedroom dive, if they band together and make sure there´s no other choice the Irish will sell a kidney, work hundred-hour weeks and pay it.”

After her latest murder case, Detective Cassie Maddox was traumatised which is why she has worked for the relatively quiet Domestic Violence section for a couple of years. But in the first chapter of this novel, her boyfriend Sam O´Neill who works for the Murder squad calls her out to take a look at a body. On the scene Cassie sees her own face, and she learns that some young girl has stolen her undercover identity as Lexie Madison. So now the main question is if the murderer wanted to kill the anonymous girl, or if he might have been after Cassie Maddox. In order to smoke out the murderer, Frank Mackey who runs the undercover operations persuades Cassie to assume Lexie´s identity – just for a few weeks.

Cassie had just found some kind of equilibrium with her new colleagues and Sam, but now Frank and Sam pull her in each their direction. Frank is a persuasive detective who obviously loves excitement and challenges whereas the gentle and level-headed Sam tries his best to protect Cassie. And Cassie has to make up her mind whether she prefers her quiet existence or if she wants to live the highly intoxicating life of an undercover agent again. And then there are Lexie´s four, young friends whom she lived together with in Whitethorn House.

Though I must agree with reviewers who have pointed out that the story is long-winded (the paper back is 700 pages), I was completely absorbed by the haunting atmosphere and the compelling characters. I just had to know what happened to them.

Dorte - Thanks for this excellent review. I thought this was thoroughly engaging, too, and French's character studies fascinating I'm glad you enjoyed it. To me, watching Cassie get absorbed in Lexie's life was the most fascinating.

I think it says a lot about the book that it held your interest and really engrossed you, despite its length! Good recommendation, thanks.

Margot: it´s good to know she *has* written her third novel.

Elizabeth: I love looong, character-driven mysteries, but some people don´t so it was only fair to mention this potential weakness.

Oh cool! I'm still trying to arrange the books I'm going to read for your other challenge. I'm so excited for it.
CD

Nice review, Dorte. I didn't like this as much as you - I found it unlikely (too many coincidences) and the undergraduates not very believable. Did you think the book similar to that one by Barbara Vine about the young people in a country house? (I think it was called A Fatal Inversion).
best wishes
Maxine.

I tend to be prejudiced against this author based on "In the The Woods" (which you reviewed before I started following your blog). My family members who read it shared a lot about it and I don't think I would have been satisfied with the ending. At 700 pages, I'm not sure I would give this one a chance.

I'm off to read your review of the other book now...

Clarissa: I have also been busy planning & preparing challenges. It is exciting looking forward to the reading experiences, but it takes time.

Maxine: I know, and I can see these weaknesses. Still, I enjoy her writing style very much, and I agree that there are some similarities with A Fatal Inversion.

Kelly: readers who regard "In the Woods" as a police procedural may be disappointed with the ending. I think of it as a thriller, and I quite liked the idea of the unreliable first-person narrator (a literary device I am trying to teach my students). So sometimes your reactions depend on your expectations - and which mood you are in when you read the book.

Hi Dorte,
Sounds like the sort of book I would read. I picked up In The Woods at the library and had a peek, definitely liked the writing style. I'm also into character-driven stories. As for the 700 pages, I'm still willing to give that one ago. Thanks for your review.

Joanne: if you want to review a lot of books every week, it is a bad choice, of course, but I love becoming engrossed in a book, knowing there are hundreds of pages to go until I have to part with the characters.

I really like her writing style but I didn't enjoybthis one as much as the first because I was expecting more of a mystery. Really loved the characters, though.

Belle: I know she doesn´t focus on the mystery but on the characters; still I was just swept away :D

I feel as if I'm falling behind, I still have In The Woods in my "to be read" pile, but this premise intrigues me and I almost want to read this first.

However, I don't read as fast as you, and 700 pages might mean a vacation or international travel read.