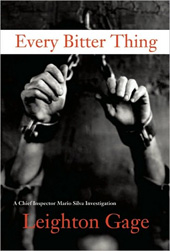 This police procedural is the fourth in the Mario Silva series set in Brazil.


A few days before Christmas Jonas Palhares is killed, literally on his own doorstep, just when he thinks he has moved to a safe area of Rio. He opens his door when he shouldn´t have and becomes “another statistic, one of Rio de Janeiro´s unsolved homicides.”

The next victim is Professor Paulo Cruz who has founded a lucrative business by writing popular works on sexuality. Quite soon, the police give the case up as hopeless.

Then Juan Rivas, the son of the Venezuelan foreign minister is killed, and hey presto, the Federal Police are put on the case, only to discover that four men have been killed in exactly the same way.

Chief Inspector Mario Silva of the Federal Police and his sidekick Agente Arnaldo Nunes discover that the victims had one thing in common: they were all passengers on the same flight from Miami to Brazil. Quite a nice touch!

A story about seeking justice one way or the other in a corrupt society with much brutality. Furthermore there is a strong sense of place and contrary to the first book which was a bit graphic once in a while, I think the writer strikes a fine balance this time.

It took a few chapters to get into the names and the various branches of the Brazilian police force, but soon I was engrossed in the plot, turning page after page to see if my theory was correct. Well, I guessed part of it, but not the final twist.

Dorte - Thanks for this excellent review! I like Leighton Gage's work, but I haven't yet read this one. I will now :-). I agree with you that having all of the victims be fellow passengers on a flight is fascinating....

Sounds like this one might be good to keep in mind should I attempt the global challenge next year.

Margot: I am sure you´ll enjoy this one very much.

Kelly: yes, I think it would be a good choice for the Global Challenge.

Thank you for taking the time and trouble to review my latest book, "Every Bitter Thing". I'm very glad you enjoyed it.

Here's something that might be of interest to some of your readers:

By Thursday, at the latest,"Blood of the Wicked" will be available through the new UK Kindle Store.

And it will be followed, a month later, by the second and then, a month after that, by the third book in the series.

All for a price not exceeding two English pounds.

It's a really good deal for Kindle owners.

Leighton: my pleasure :D
And as I ordered a Kindle three days ago, it is indeed good news that there will be some good crime fiction available at reasonable prices.

Dorte: Thanks for visiting my review of Gage's latest book. I love that Soho press prints authors who set their mysteries in other countries or in interesting U.S. locales.