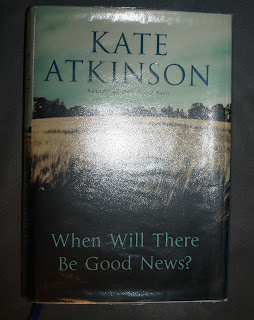 The book is the third in the Scottish Jackson Brodie series (a recurrent figure though one could argue if Jackson is really the main character in any of them).

During the first couple of pages, the reader feels lulled into a relatively harmonious state. A mother and her three children get off the bus and walk towards their home. A primitive cottage in the middle of nowhere, yet home, which we see through the eyes of six-year-old Joanna.

This peaceful and ordinary existence is shattered very abruptly, however, when a man appears out of nowhere and kills Joanna´s mother, her sister, her baby brother – even the dog whose name Joanna cannot recall years after the disaster. Another tiny, but very realistic detail.

After this memorable beginning, the story continues when the man who wiped out Joanna´s family is released from prison. In spite of the highly dramatic events, the novel is not mainly about the crime but about the lives of the grown-up Joanna Hunter and the people around her. People so real that you cannot help worrying about them! We also follow Jackson Brodie, ex-policeman and ex-detective, plus Louise Monroe who was a very close colleague in book two. In the meantime they have both married – a bit impulsively, perhaps.

The most engaging character, however, is Reggie, the sixteen-year-old girl who looks after Joanna´s beloved baby. With Rggie´s rather troubled past and present, Joanna´s home turns into a haven for her as she slowly begins to feel they are her real family. When Dr Hunter and the baby are around, things are as they should be – when they are not, Reggie does what is in her power to rectify things.

A lovely story, and of course it is about crime to some extent, but the book is definitely more literary than fast-paced. And the language? Downright brilliant.

My review of the first, Case Histories.

My review of the second, One Good Turn (I must remember to reread this one – written by Kate Atkinson – there must be more to it than I thought in March).
Indsendt af Dorte H kl. 13.10

I thought the beginning of this book was amazingly vivid, but I wasn't really a fan of the book as a whole - I thought there were a few too many extreme coincidences. I haven't read the first two in the series so wonder if that also meant I didn't pick up on the side plots of the main characters?

Jackie: if you judge it as an ordinary crime story, it has some deficiencies (coincidences and a very slow pace). I think I see it as some kind of Chinese box with an intricate tale about the characters with a crime plot inside. But I can see your point, and the second annoyed me quite a bit because the first ´event´ seemed too silly and unmotivated for me.

I love books with strong, realistic characters so this appeals to me, thanks for the recommendation.

Tracy: I am sure you´d love Reggie - she is so amazingly real, and though she has very hard odds, she never stops fighting.

Dorte - What a fine review!! Thanks for this. I agree completely that what really draws the reader in is the way we get to care about those characters. We see the aftermath of this horrible crime in the way they are...

Despite the dog getting killed right off, this sounds like an interesting book.

Kelly: it is a fantastic book, and apart from that initial drama, they are very kind to dogs in it :D

I have One Good Turn in my tbr pile, but I remember picking it up and reading a few pages and thinking, wait, this isn't a crime novel. I think I should give it another try.

Belle: One Good Turn is the one I liked the least because I thought the car accident thing that set it all off was rather silly. She writes brilliantly, but if you ONLY judge it based on the crime and the solution of it, it will probably disappoint you. If you see it as a very well-written psychological suspense story, you may like the second, and I think you´ll certainly like this one.

I think Reggie is one of the best characters created in recent times. She's terrific.

That sounds like a truly engaging story. What a horrible opening scene but it sure draws a reader in. Thanks for the review.

Patti: she is, but the third is MUCH better.

Vanda: she is quite unforgettable.

Clarissa: it did come as a shock because we were lulled into some state of idyll, but apart from that one scene the story is far from graphic.

I couldn't put down Case Histories or One Good Turn. I'm now reading Behind the Scenes at the Museum. It hasn't gripped me as quickly, but I trust it will, since Ms. Atkinson is a wonderful writer and story-teller.

She'll be at the Bouchercon (http://www.bcon2010.com/what-is.php) conference in October, and since it's conveniently nearby, I'll be attending! I'll have to get a copy of When Will There Be Good News for her signing.

Cathryn: she is a great inspiration, especially as I am more of the worthy type than I am Hemingwayesk :D
I wish Bouchercon was near my backyard - I would love to go to meet YOU - and of course also Kate Atkinson.

I would love to meet you as well! Maybe some day...

Kate Atkinson was at the Christchurch Writer's Festival two years ago, and she read from When Will There be Good News. The reading actually changed my perception of the book, which I'd seen as quite dark. But she read it as it was in her head and imbued it with a lot more humour than I had realised. It made me see the book in a whole new light.

I read the first book in this series just this year. i really enjoyed it. Thanks for reminding me that I want to read more by this author.

Cathryn: when we are both world-famous crime writers they´ll invite us to Bouchercon! :D

Vanda: I can see the dark sides to it, but also that it is permeated with a sense of humour that makes it bearable.

Heather: I hope you´ll enjoy this one as much as I did.

A marvellous book, as is her new one.

Martin: they are marvelous, those Scots!