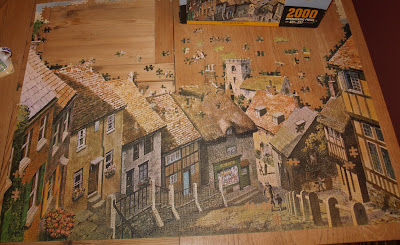 You might like to see that though I have not read much lately, I have not just been twiddling my thumbs. Here is a progress report on my jigsaw and a translation of an Arnold-and-Mildred story from November.

”Oh, poor you! Not again!” Phyllis ´s low-cut neckline hovers dangerously close to Mildred´s nose while she flings several lumps of sugar into her teacup. She makes good use of this opportunity to take a closer look at the swollen eye.

“Now you really must do something about it! You´ll have to leave him. Women´s refuge!” Martha´s knitting needles clink indignantly in close competition with her busy tongue.

“But he was so sorry this time. He promised …” chirps Mildred. She all but loses the thread of the complicated pattern she has devised. Another nice and warm winter sweater for Arnold.

“He promised … well, they always do, don´t they, Mildred? But when have you heard about a man who kept his promise?” Phyllis is the hostess of their club today and expertly she regains their full attention.

Mildred sips at the sickly-sweet tea. How kind they all are. And when she remembers how close she was to giving up the knitting club a few months ago. Phyllis had had a divorce with such a to-do, and Pauline´s lover had invited her to Malaga for an illicit weekend. Martha got her breast cancer, and Alison suspected that her husband pranced around in her clothes when she was away from home.

And in the meantime Mildred had just knitted her intricate sweaters while she tried to insert a few words about Arnold´s mushroom excursions.

But then she had tripped over a basket of mushrooms in the kitchen and broken her arm. The words had just rolled off her tongue when she told the others that Arnold had hit her. Now she was looking forward to the knitting club every Thursday again.

Tripped over a basket of mushrooms and broke her arm? Somebody obviously as clumsy as myself. Best wishes for 2010 Dorte, I'm looking forward to many more stories.

Petty Witter: thank you. I also wish you a very happy new year (with no broken limbs or anything).

Dorte - Thanks for this terrific story! I just love the little twist at the end, and I do like your writing style. It's been a real privilege to meet you this year and share the blogging world with you, and I wish you and your family all the best for 2010!

Great story, Dorte. :) Poor Arnold. He'll be lucky not to get stoned in the street by the knitting circle!

Dorte I wish you too all the best for the coming Year.

Margot: thank you. This year of blogging has been full of unexpected pleasures - I didn´t know at all how many great friends you get all around the world.

Elizabeth: thank you. And this time the ´joke´ was on Arnold, but if you remember my Christmas story, you will know that Mildred has some reason to resent him. As my daughter says, theirs is such a sad marriage. They loathe each other, but they will never ever get a divorce.

Jose: thank you very much, and the same to you.

What a lovely story Dorte, and I love the jigsaw! Happy New Year

Thank you, Kerry, and happy New Year to you.

I though the jigsaw suited Arnold and Mildred´s environment quite well ;)