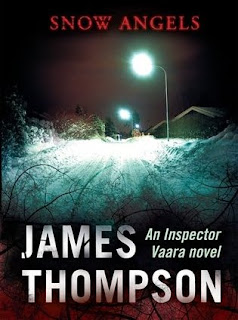 James Thompson´s debut, Snow Angels, which I reviewed yesterday, is marketed as ´noir´.

But what exactly is ´noir´?

According to Wikipedia, ´Noir´ or ´Hard-boiled´ detective fiction “is a literary style which portrays crime and violence in an unsentimental way.”

Not a very helpful definition. Unsentimental? That covers a vast majority of the crime I read.


Googling a bit further, I found this quotation by Bill Pronzini:

"The noir crime story deals with disorder, disaffection, and dissatisfaction … The typical noir character (if not the typical noir writer) has a jaundiced view of government, power, and the law. He (or sometimes she) is often a loner, a social misfit. If he is on the side of the angels, he is probably a cynical idealist: he believes that society is corrupt, but he also believes in justice and will make it his business to do whatever is necessary to see that justice is done … In the noir world, extremes are the norm. Clashes between good and evil are never petty, and good does not always triumph, nor is justice always done."

I agree that Thompson´s novel in some ways is as dark as the ever-lasting Finnish winter night, but his protagonist, Inspector Kari Vaara, is neither cynical nor dissatisfied with life in general, he is happily married and will probably turn into an engaged and responsible family father soon.

So is there perhaps a growing tendency to call crime novels ´noir´ if the murders are cruel and unusual?

If so, it makes sense to call Henning Mankell and James Thompson´s novels noir.

Is ´noir´ one of your favourite genres? Then please tell me how you define it.

And now you should run off to read about Donna Moore´s "not altogether serious route from noir to cosy." - Enjoy!
Indsendt af Dorte H kl. 11.00

Oh my, Dorte, you know that no two people will ever agree on a definition, don't you? :o)

I love noir (both films and books). My favourite definition is from Eddie Muller - the Czar of Noir. Basically, he said (and I paraphrase) that if a man walks into a PI's office and asks him to follow his wife, the PI does, solves the crime, and then returns to his lonely, seedy office, opens a bottle of whiskey and waits for his next case then that's hardboiled. If the PI follows the wife, falls in love with her, she persuades him to help her kill her husband and they will split the dosh, so the PI kills the husband and then the scheming wife double- crosses the PI and he ends up dead or in jail or on the street, then that's noir.

Basically, the hero starts out screwed and it goes downhill from there.

It's about atmosphere for me - a prevailing sense that the world is a bad place and that no matter what he or she does, the protagonist is fighting a losing battle. Call me evil, but I like seeing a protagonist who gets into a hole and still keeps trying to dig himself out, even if he knows it's an impossible task and, even worse, that there's someone standing at the top of the hole, shovelling in dirt on top of him. And when the shovel is thrown in, it hits the protagonist on the head.

There's a sense of hopelessness, fate, people spiralling downwards into an abyss of catastrophe.

The characters often use each other for their own gain. The heroes are hard-boiled, cynical, morally ambiguous, obsessed, disillusioned,often world weary loners, or with a mysterious past. If they're a good guy, then they live in an immoral or amoral society. They know that trying to make things better is ultimately doomed to failure, but they do it anyway.

I actually think it's easier to define it in the movies, rather than in books, but, like those noir films with their shadows, flashes of neon, rainy streets, noir for me is pessimistic and moody, full of characters beyond redemption, sliding deeper into despair. One thing there isn't in noir and that's a happy ending :o) There - sorry you asked?

Dorte I found sometimes useful the definition I quote in Spanish in my blog. A free translation can be: “A noir crime story has in its root a criminal fact that generates an investigation. What happens is that a good noir crime story goes beyond the investigation of who kills or who committed a criminal offence; it investigates the society in which the facts were produced. It opens telling us a story and it ends telling us how that society is.” (Paco Ignacio Taibo II).

But paraphrasing Groucho Marx that is my definition, if you don’t like it I have some other definitions as well.

So many classifications, I must admit they have me baffled. Thanks for explaining noir to us.

Donna: I love when my readers have a lively discussion, especially in this case where I have a rather dim idea about what ´noir´ is. It has never been my favourite genre, and your definition (plus Bill Pronzini´s) prove that James Thompson´s novel is not noir. It would be more correct to call it Scandinavian gloom (which I like).

Jose: one could say that Thompson investigates the Finnish society, but his main aim - as I see it - is to tell a good crime story. And you and Groucho Marx are not the only ones who have several definitions - which is why it is difficult to pin down what noir is.

Tracy: I am not sure I have defined it, but I hope we have begun to narrow it down.

Dorte - You ask such a very interesting question! I admit, too, that I can't come up with a hard-and-fast definition, especially since noir isn't my very favorite sub-genre of crime fiction.

As I think about it, I like Donna's focus on atmosphere. Noir novels don't have to have terribly cruel murders, but for me, a novel is noir if the atmosphere is particularly dark, moody and hopeless. Even if the protagonist has some sort of hope or positivity, the overall sense of a noir novel is bleakness. That bleakness can come through in the characters' dysfunctional relationships, or the form of murder, or something else, but it's got to be there for a book to be noir for me. As I say, though, I'm not a noir expert...

Dorte I found this in the Internet,http://www.defectiveyeti.com/archives/002167.html
about the difference between noir and hardboiled.

I like the spiraling down idea best. That no matter where it starts, things spiral down from there. Atmosphere is very important and so is a sense of doom. I like noir, but not all the time. A steady diet of it makes me paranoid.

I am not the least bit interested in noir - I hate it when the detectives have too many personal problems. They can have some. That is okay. But if they drink too much, have too much trouble with their love life, are too cynical etc I don't wanna read it. Weird because I love dark sides in almost any other genre.

I do not consider crime stories about serial killers or cruel and usual crimes noir. But that may just be me.

Patti: I agree that that definition is good and useful. And again, James Thompson´s is NOT noir by this definition.

Louise: like you, I am not a fan of ´real´ noir (or cynical detectives), but as you can see, some people call Mankell and Thompson noir, and I like their books :D

This is a great post, because I'd never really thought about how people define "noir", and if I see a book labeled as "noir", I'm not as likely to pick it up. Yet I think I would enjoy Thompson's debut - to me, it's not "noir" at all. For me, the term has everything to do with how the main character sees the world.

Belle: you are just like me there, as a rule I wouldn´t go for ´noir´ - but during the last week I have read two and enjoyed both of them very much indeed.