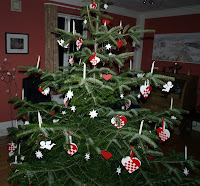 III. In spite of all the trouble he had caused, Arnold Kickinbottom had generously let Uncle into the house for a short break and a glass of water, oil-smudged and unkempt as he was. But what was intended as a flying visit in the kitchen had escalated into a ridiculous charade with Uncle Nick and Aunt Augusta playing dominoes and drinking Arnold´s best sherry while Aunt Beryl swallowed pills in various sizes and colours and sang naughty Christmas Carols. No one knew what was in her arsenal of glasses and bottles, but some of them certainly had a stimulating effect on the ancient hag who used to sit quietly in a corner, crocheting pink doilies. When Aunt Augusta had sipped at the sherry so many times that she tried to lure Uncle Nick under the mistletoe to encourage improper behavior, Arnold had had enough. Not in his house!

As usual, Mildred was very far from the rock of support and stability a husband could wish for. In between decorating the house from top to toe in tinsel and paperchains, baking twelve sorts of cookies, cooking mince pies and stuffing the turkey, she just sat about, knitting her scratchy sweaters. At least they had no electric Christmas candles. Arnold had put his foot down firmly; he would not tolerate such waste.

Single-handed, Arnold had marched the aunts off to bed and requested Uncle Nick to leave the premises. And that had been the horrible moment when Uncle had handed him the gift. Arnold nearly wet his pants, but he had a life-long training in disciplining his upper lip and his bladder, so without turning a hair, he had received the large parcel and tucked it safely away underneath a huge pile of hand-knitted sweaters.

But he had known immediately that this was the point of no return! Uncle Nick had turned into an encumbrance Arnold would have to remove immediately.

“You´d better leave now, dear Nicholas, or you will be late for your round, but do come into the kitchen for a bite before you go.” He had grabbed a moth-eaten coat sleeve and dragged Uncle off to the kitchen. His hands shook, and he was sorely tempted to strangle Uncle in some of Mildred´s glittering tinsel, but instead he had put a plateful of her nasty mushroom hotchpotch and a mixture of some of his really advanced homebrewed schnapps in front of the old guy. “Cheers, Uncle Nick.”

“Now, off you go like a good old Santa.“ He patted Uncle Nick on the shoulder and saw him off, certain that no one could survive a sledge trip in that condition.

Dorte - I am so liking and admiring your descriptions of these characters! They are so rich! I can just see Aunt Augusta. I can't wait to read the next installment.

Margot: I also feel I know Arnold and Mildred quite well by and by. But then I have written three stories about them in Danish before this one (the only one I have translated is the one about mushrooms and toadstools). They are rather nasty, tightfisted people - which makes them so interesting to write about.

In short supply this year, there will be no improper behaviour under the mistletoe. Apart from the sipping of sherry, I so want to be an Aunt Augusta, what a brilliant character.

These are wonderful characters! And well-developed, too...I can tell that you've written them before (or, if you haven't, then you've got them really solidly in your head!)

Petty Witter: remember, if it is husband and wife, it is not improper at all (but in the case of Arnold and Mildred: highly unlikely!) I agree that there is potential in Aunt Augusta, but Arnold does not really see it that way.

Elizabeth: thank you! I think Arnold came with quite a lot of personality from the very first day, and he is probably a mix of several grumpy old men I have met in real life as well as in fiction.