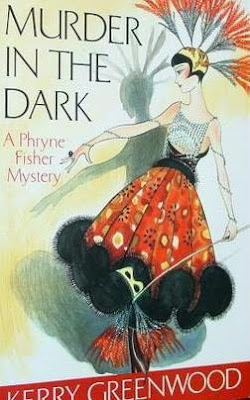 This cozy mystery is from Australia, the 16th in the Phryne Fisher series. The story takes place in Victoria in the year 1928, when the rich and independent Miss Fisher receives an anonymous letter among all her Christmas cards, warning her that she had better stay away from a fabulous five-day New Year´s party. Phryne Fisher is not a person one tells what to do, however, so now she is determined to go.

The series conveys a nice sense of the roaring twenties and the decadent drink, drug and dance scene of affluent Australia. The weather is very un-Scandinavian: “The north wind was picking up. By tomorrow it might be the full dragon´s breath which withered trees and started bushfires and always gave Phryne a headache.”

To sum up the plot in a few words, a spoiled little boy is kidnapped, and the mysterious ´Joker´ threatens to kill the generous and popular host of the party. Phryne Fisher must take action – in between the many indispensable meals, games and concerts. She solves the crimes expertly, but more like an intellectual puzzle or game than through hard work.

So even millennium cozies will be cozies, and typically for the genre, the whole story centres around one manor and the surrounding lands, but the sex scenes have become somewhat more explicit and might make Miss Marple blush.

An example of the humorous tone of the story:
“´But surely this is exaggerated´ protested Miss Eliza. ´This Joker sounds like something out of Sexton Blake.´
´Stands to reason there must have been someone to copy all those villains from,´ said Dot reasonably.”
Indsendt af Dorte H kl. 14.10

What a gorgeous cover. And I'm with you on the un-Scandinavian weather. Not too Canadian, either!

I'm having an art show over at my place - drop in if you get a minute.

You and your sister-in-law have arranged a splendid art show, and if my link spell works, everybody can all see it here:

This one sounds like fun. I haven't read many Australian mysteries and I enjoy reading about the 1920s, so it sounds like a good option for me.

Kate, it is fun - light and humorous entertainment, and though you don´t learn much about ordinary & modern Australians (I think), you get an impression of the upper classes.

This sounds perfect for me. I love cozies and I love the Australian setting. I'll have to look for the series at my library.