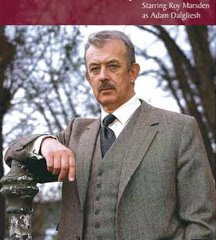 The name of my favourite British crime fiction heroes is Adam - can you guess who?

- here is part of the information found at BabyNamer
Meaning: Its source is a Hebrew expression meaning "Red earth."
Languages: This boy's name is used in Hebrew, German, English, French, Hungarian, Kiswahili, Polish, Serbian and Croatian.
Feminine Forms: Adamina
Narrative: Some authorities believe this name is Phoenician in origin, and simply means ''man.'' Others believe the Hebrew original refers to ruddy skin.
In the Jewish scriptures, this is the name of the first man. Though we aren't told if Adam named himself, it was his job to give names ''to all cattle, and to the fowl of the air, and to every beast of the field.''
Adam was also the first person to give a name to another human being. He named his wife and helpmate Chava (in English, Eve), meaning ''life,'' because she was ''the mother of all living.''

The prize: when someone has sent me the correct name, I will post a photo! (No, not of the winner - of my hero, of course). Congratulations, Steph (from WhoDunnit)

Yes Adam is a very nice name.. In Arabic it means he who has darker skin..

My suggestion is also a brilliant detective-poet :-)
At least, he is one of MY favourite fictional characters...

How good you are!
I shall find a picture immediately :)

WhereDunnit got it. Boy I was too slow when it came to blog reading today. Very nice post. Isn't it fascinating to learn about the meanings and origins of names?

Thanks, Beth.
I also enjoyed this week´s challenge. It was an easy choice for me, and one which could be combined with my literary taste.
And you must admit that even though WhereDunnit got it first, you can all enjoy her prize :D

I wouldn't have been able to guess. My post is here.

What a bunch of smarties you've got, reading your blog. I think I'm going to get smarter, just hanging out here.

The two characters I thought of had already been tackled by other weekly geekers so I didn't bother with this challenge but you've done a nice job. I always thought Adam Dalgleish was perfectly named but then fictional characters often are as their creators know a lot more about them than our parents do when they name us.

Thank you for all your nice comments :)
You are right, Julia, I have a bunch of smart visitors, and I am sure you are one of them.
- and Bernadette, you certainly have a good point there! I mean, my parents ran an enormous risk when they named me - Dorte/ Dorothea means God´s gift ;)

Dorte,
I love the way his surname, Dalgleish, rolls off the tongue and ends in shhhh.

Why are there such strict rules for naming children?

If I may suggest, you should read the Pullman books, I found them wonderful and go back to the every couple of years.

Hi Gavin.
The strict Danish rules conserning children´s names were made because people were afraid the children would be teased if they had ´different´ names or if girls had boys´ names and vice versa. In fact I am sure the children of my school would have bullied any child with any name which wasn´t boring and ordinary. So there you are :)
The rules are less rigid today because we have had many immigrants and refugees, and of course people don´t expect them to call their daughters Dorte and Anne.