“Bella had arranged her suicide as efficiently as she had done everything else in her life. In the torchlight she swung, hanging from a noose made of strong, nylon rope. Her face was white. She had prepared for the occasion by putting on lipstick and the silk top Rachael had bought her as a thank-you present after last season. Her black shoes shone so the torchlight reflected from them. She´d pulled two bales away from the wall and climbed onto them to tie the rope round a beam. Then, when she was ready, she had kicked one away.”

In this crime novel Ann Cleeves switches among the point of view of four women. The first voice is Rachael Lambert, the friend who discovers Bella´s body, and the team leader of an environmental survey near Kimmerston in Northumberland National Park. Rachael´s ambition is to be a confident and assertive leader, but at the same time she is afraid to appear rude. On the whole, Rachael struggles to find her own feet professionally as well as privately. She has had an affair with Peter Kemp, her boss, a man too charming to be true, but when Rachael met him, she was too young or romantic to see this.

We also follow Rachael´s team members, Anne Preece and Grace Fulwell. The three very different women do not really hit it off, to say the least. Anne Preece is a confident and reckless botanist who has had a number of affairs because her homosexual husband cannot satisfy her. She despices Rachael and regards Grace as a stuck-up madwoman.

Grace Fulwell is a pale young woman who prefers to keep her own company. In her chapters we learn that as a lonely foster child she “had to pretend at failure to be accepted at all by the other kids at school” and that she considers animals and facts easier to handle than human beings.

As Rachael cannot come to terms with Bella´s suicide, she engages her bossy and enterprising mother Edie to help her find out what lies behind. She realizes that she did not know Bella at all, and that the quiet, unobtrusive farmer´s wife has a tragic past, but Rachael and Edie do not make any real progress until a second woman dies.

We are not properly introduced to Vera Stanhope, the fourth and final voice, until nearly half-way through the book, but this remarkable woman is certainly worth waiting for.First of all, it is quite refreshing to meet a female detective who is more like a bag lady than a dainty beauty queen. Vera Stanhope does not do much to placate the people around her, either, in her direct, nearly sarcastic manner, “... if I do have a reputation for eccentricity, I have one too for getting results”

Just like Stephen Booth´s Ben Cooper and Diane Fry series, the hostile and dangerous environment plays an important role. An interesting, recurrent symbol is the crow trap with its live bait. It takes a long time, however, before the reader is able to figure out who is the bait and who is supposed to walk into the trap.

Vera Stanhope does get her results in the end, though, even if she is not at all as certain as she pretends, and after this first thrilling meeting with the grim landscape and characters of Northumberland this reader certainly craves for more! This is an unusually promising ´first in a series´. 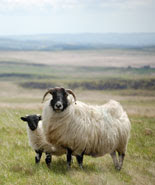 I'm so glad you enjoyed it, Dorte! I'm a great fan of Vera Stanhope.

I certainly also fell for the unusual Vera Stanhope :)
Fortunately I have one more on my shelf - but no three - so I have not quite decided if I want to read it now or buy no two first.
Is it important to read them in order?

Ever since I read and enjoyed the first of her Shetland Quartet books, I've been looking for other books by Cleeves. I've read the first in her UK birdwatching series and liked it a lot. Vera Stanhope is also on my wish list, but I'm having more trouble finding the first in this series. I won't give up, though!

Hi!
I have an award for you. You can pick it up here:JUST BOOKS: YOUR BLOG IS FABULOUS AWARD!
Have a great day!!

Cathy, I bought a very cheap, used copy of this one. It is quite ugly, but on the plus side I think it is charming to have an old book which comes from Falkirk Library :)

Sherrie, thank you so much! That is very kind of you. I am probably going to write about it tomorrow.

Great review Dorte, and it sounds like a book I might enjoy. Will check it out once life gets a bit less hectic than what it is right now.

Louise, I really think you would. The female detective is wonderfully different, and if you like the type where you learn a lot about the environment, this one is of really good quality. Not a lot of cinnamun buns and nappies, but grown-up people I enjoyed learning more and more about.