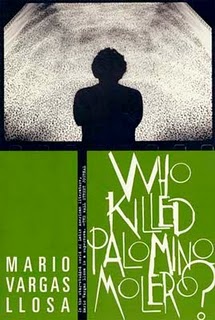 As I mentioned in my quotation Sunday, this crime story takes place in Peru of the 1950s. Not a peaceful and cosy environment, but if you get through the first page, you´ll have survived the worst bit.

The young airman, Palomino Molero, is killed in the most brutal fashion, but neither his comrades from the air base nor the villagers want to talk about the case. They appear scared, and the locals have made up their mind anyway that no one will ever be punished because ´the big guys´ always shut the police up.

The book is about crime, but it is also a different story where the reader meets ´gentlemen´ and coloured men, fat women and intense women, vultures and delusions, and many versions of one death – and where exactly lies the truth?

The two policemen on the case are smart, worldwise Lieutenant Silva who knows how to manouvre in a world of corruption, and the inexperienced Officer Lituma who stands in awe of his superior – or is this impression also a delusion?

Other surprises were the unexpected ending and the fine, but different tone of dark humour. If you want to try something out of the ordinary, I recommend this remarkable, little story.

I bought it myself – read for the 2010 Global Reading Challenge, Peru, South America.

I have this author on my list - maybe for global challenge #2 (in a few years, when I've gotten through my TBR mountain)

In my last comment I meant to say I have this book on my list (having already read one by him). I am very tired tonight and keep making mistakes. time to go to bed

Bernadette: do you mean to say you don´t have books aplenty from *all* continents in your TBR? - if not, it must certainly be too small! ;D

Dorte - Thanks for this review. I've read other work by Llosa, but not this one. It sounds like a really interesting approach to a crime fiction novel...

A fine review Dorte. Glad you like it. I read it quite some time ago, so I must read it again soon. Certainly Vargas Llosa is one of the best writers in Spanish now-a-days.

Margot: I´d love to see what you make of it.

Jose Ignacio: I am glad you recommended it! It was an excellent choice for the global reading challenge because of its differentness.

There's an interesting sequel that brings Officer Lituma to the mountains (the Spanish title is Lituma en Los Andes--the English is Death in the Andes), taking Lituma's story into the era of the Shining Path guerillas and surviving indigenous cultures. Not a cheerful book, and Vargas Llosa has certain cultural biases, but still startling and interesting, more "gripping" perhaps than the Palomino Molero story.
Glenn

This sounds quite intriguing. I'll add it to my "wish list".

Thanks for the tip, Glenn.

This looks like an interesting read, a little out of the ordinary, which is sometimes what I feel like reading!

It does sounds like an interesting book. It's sad but I don't read much foreign books. I should start.

Sounds like something for my taste. Thanks for the tip :-)

Belle: I agree that it is out of the ordinary.

Clarissa: of course I read books in English all the time, but the reason why I came up with the global reading challenge was that I hardly ever ventured out of my comfort zone.

Søren: yes, I think you are quite right!

Funny: He just got the Nobel prize :-)

Wow! Thanks Søren, I just added it to the post.

And now I am even more certain he is your kind of writer :D

I think you're right. By the way: Must be the first crimewriter to get the Nobel prize, or?
;-)