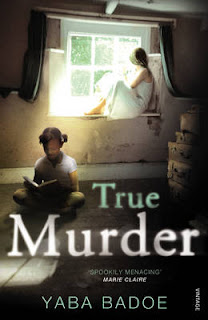 This thriller is a debut from Ghana

The narrator of this rather unusual story is eleven-year-old Ajuba from Ghana who has been dumped at a boarding school in Devon. Her father did not feel he could take care of her after her mother´s break-down. Ajuba does not really feel she belongs among the British middle-class children so when the kind and well-meaning owners of the school, Major Derby and his wife, tell her to look after Polly, the new girl, she feels it is her duty to do her best to help the other newcomer settle in.

Though you have never met Polly Venus, I am sure you know the type. A girl who has seen far to much and knows about a world the other children have not quite understood exists yet. Like Ajuba, she is an outsider, but she takes charge immediately, making them believe her American ways are superior to theirs. She manipulates the naive girls around her, introducing secrets and dangerous games, e.g. the true murder game that gave name to the title.

Soon Polly invites Ajuba to visit her in her beautiful home, Graylings, first for a weekend, later every time the girls have a weekend or holiday away from school. Ajuba misses her own mother acutely and is soon whirled into the exciting atmosphere, finding it difficult to decide if she likes her friend Polly best. Or her charming mother. Or her considerate father. But slowly it becomes clear where Polly has her manipulative behaviour from.

We are told on the third page that Polly is going to die, and the story also involves other deaths, so this is the kind of plot where we approach the disaster from two sides: the child Ajuba who tells us about the events leading up to it, and an adult Ajuba who looks back on that time a few years later by discussing it with her mother´s sister, Aunt Lila.

As Ajuba grew up in another culture, it seems fairly plausible that she notices the peculiarities of the Englismen around her though she is so young: “despite their love of nature, the Derbys were not life-affirming huggers of trees or people”.

Like “Red Leaves” the story relies on quite a bit of premonition, but the plot moves along at a better pace. There is also superstition, just as Ajuba occasionally ´sees´ scenes she has not experienced herself. They help her come to terms with life and the scary events that take place around her, but the plot does not rely on supernatural intervention which makes a difference to me.

The book was sent to me by Maxine, Petrona, and I read it for the 2010 Global Reading Challenge # 11 (Ghana, Africa).

You've sold me Dorte - but when am I going to find enough time to read it?

Excellent review, Dorte, I think you have captured the various unusual essences of this book very well. I am glad you enjoyed it. I thought that for a first novel in particular, it's very good.

Dorte - Thanks for this excellent review! It sounds like an utterly fascinating book, and an interesting narrator. This one goes on my TBR.

I might not have signed up for your global challenge, but I've certainly broadened my perspective just from reading your reviews!!

What a great book review! I know a writer from Ghana, she's a very good writer too, and reading her book made me wonder why I didn't read more international fiction. Here's another great example of why we should.
CD

Kerrie: oh, I am sure you people will force me to make a new global level soon - and then you´ll need this one ;)

Maxine: it was easier to review BECAUSE it was unusual. A real pleasure.

Margot: I am glad to have tempted you with something that is different.

Kelly: that is a great compliment indeed!

Clarissa: to be quite honest I always revert to British crime, but I have enjoyed some of my field trips to other parts of the world.

Interesting with a mystery set in Ghana. Don't think I've ever read a book with a Ghanese setting.

Louise: the main part takes place in Britain, but Ajuba´s background is important for the story and for the different atmosphere. Her African perspective makes her a very good observer.

This one looks like an interesting read - it's definitely a different perspective. I'll have to keep my eye out for it.

You are finding some excellent books through this challenge. I just did Australia.

Like others have said, this really looks interesting, especially the story told through the eyes of a child who is an outsider.

Belle: it was ever so refreshing to read a fine thriller from a child´s perspective.

Patti: my well-kept secret is that I read the other global readers´ reviews and buy the books that get the best reviews ;)

Beth: it has been done before, but it is not all writers that get away with it like Badoe does.