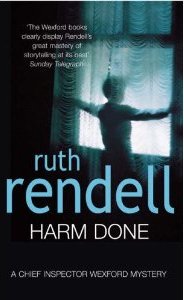 In “Simisola” Ruth Rendell dealt with the issues of illegal immigration and unemployment. In “Road Rage” it was the environment.

In “Harm Done” (1999) the recurrent theme is domestic violence. Quite early in the novel various positions are introduced during a discussion in Wexford´s own home.

Sylvia, Reg Wexford´s very conscientious daughter, works as a voluntary for “The Hide Helpline”, offering advice to women who are victims of violence in their homes. As usual, Sylvia goes out of her way to help and support strangers, but she is not quite as patient or tolerant when it comes to communicating with her own family.

Wexford assures her that the police are taking the problem very seriously through their domestic violence programme and adds, “We´re even putting in place a scheme to encourage friends and neighbours to report evidence of domestic violence.”

And this is when Dora Wexford chips in: “It sounds like the Stasi or the KGB to me... The nanny state gone mad.”

Of course the wole point is to let the reader meet different perspectives, but it is not the first time that Rendell lets Dora Wexford express very conservative attitudes and a certain scepticism of young women´s struggle for equality and independence.

For once Wexford listens to Sylvia and learns from her, however, and her advice turns out to be very useful indeed when he is involved in a case where domestic violence seems to play a role.

As a teacher of literature I know how important it is for a reader not to mix up the author and the narrator – or the author and any of the characters. So one cannot just conclude that Ruth Rendell agrees with Sylvia, with Reg or with Dora Wexford. On the other hand it is clear from several novels Rendell has written, dealing with a broad range of social issues, that this writer is concerned about (female) victims and to some extent also criminals who have suffered from social injustice, abuse etc. And always without compromising: the crime plot is first rate and keeps you engrossed until the final chapter.

No more about Ruth Rendell right now, but some years ago I held a talk about clergymen in British crime. Would you be interested in a series called “Is there a vicar around”?
Indsendt af Dorte H kl. 19.18

Dorte - Thanks for this terrific analysis of Rendell's work. You are absolutely right that we can't jump to conclusions about Rendell's beliefs just because one or another character has certain beliefs (I shudder to think what others would feel about me if they thought I believe what some of my own characters believe). But I agree that if you look at Rendell's work on the whole, you see a theme of concern for those who've become victims, and that includes women. Excellent series of posts, and I would love a series on the clergy. Please, please, please do one!! Please?

Well, vicars do seem to be a staple of classic crime fiction (Rev Green in the library with the dagger), so it would be fun to see what you could do with this theme!

On Rendell, I agree that one cannot assume that the author speaks for one character or another, though I always had the idea that Rendell "was" or "is" Wexford, if anyone. I always thought she was rather irritated with Sylvia and was much fonder of Sheila (have I got it right way round? She liked the daughter who became an actress more than the one who did not), and put that view into Wexford's character. But in the later novels, she gets bored with the actress one (she seems to drop out) and focuses more on the other - maybe she's coming round to her, or maybe there are more dramatic opportunities in her life. Particularly for an author who, as you say, is concerned with social issues. She (Rendell) is a Labour peer and I think feels very strongly in favour of the disadvantaged, though she has not much time in her novels for the "caring" professions (aka the "nanny state" or "do gooders" as one of my daughters calls them when they come to give talks at the school to warn the girls about one awful thing or another.)

Margot: vicars you shall have.

Maxine: I agree that Wexford is probably closest to express Rendell´s own attitudes. Funny that some female writers seem to be better at creating credible male than female characters. But when Rendell and P.D. James were young, it wasn´t easy to create an exciting AND credible female protagonist, I know that.

I think Rendall shows how you can discuss complex social issues so well in crime fiction - it's a great vehicle to do so.

Simisola is coming up a lot lately - I'm going to have to read it!

Speaking of Vicars... I'm currently reading Murder at the Vicarage, by Agatha Christie.

Count me in on the vicar series. Sounds interesting!

I think it is best when we're not sure who the author is identifying more with among their characters, I like it when they spread opinions and causes among their various creations and I like it even more when they offer characters on both sides of an issue.

As for vicars I would be curious to see what you do with this theme so I say bring it on :)

Vanda: well, Murder at the Vicarage is more or less a must for my theme, isn´t it?

Bernadette: like you, I prefer that the writer does not force his/her opinions down my throat :D