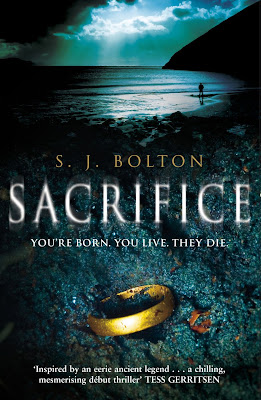 This British thriller is a debut, and it takes place on Shetland.

When surgeon Tora Hamilton wants to bury her dead horse, she discovers the body of a young woman whose heart has been removed.

“Keep out of it” says her husband. The police, her boss, and her father-in-law say the same. Has any (curious) woman ever listened to this useless piece of advice? The police do not seem to make much progress, and of course Tora feels obliged to find the truth about the young woman: who was she, what happened to her, and how did she end up in Tora´s field?

Perhaps it is true that Tora gets too involved. Soon she sees conspiracies all around, and nearly begins to believe in the old Shetland legends about a powerful tribe of male trolls who forced human women to give birth to their sons.

The plot is not (quite) as fanciful as that, yet Tora and the enthusiastic DS Dana Tulloch uncover several layers of deception, and soon the two women don´t know whom of the many influential men around them to trust – if any. Dana notices a parallel to Wilkie Collins´ classical crime story, The Woman in White, though one of the main themes of Sacrifice appears to be a very up-to-date ethical problem.

As indicated, the story may not be quite realistic, but give me a Shetland setting, a body in the back yard, some interesting characters and lots of excitement – and I am really happy!

Just as I thought. I suppose, though, I have misunderstood the "Bait in the Box" game. My "hints" without naming author and title were correct, but I guess I wasn't playing the game by the rules.

R.T.; I don´t know there are other rules than not naming the author or the title. So as far as I can see you did play along. I just thought you didn´t like the novel much - and perhaps you don´t? But you are certainly entitled to have your own opinion; there are no fixed rules here when it comes to taste :D

Ah, when I referred to screaming, and So Just Bolted, I guess I was trying to be too clever. The screaming quote came from the novel, shortly after the section you included. My comment about So Just Bolted was a lame attempt at hinting at S. J. Bolton. Obviously I should not attempt either humor or irony as I am not very good at such things. Finally, though, you ought to know that I rather enjoy your blog.

R.T. Oh, I did get your fine reference to Bolton´s name. What I did not realize(as I read the book some days before the bait post and have a horrid memory), was that the part about screaming was a quote.
So I think we have cleared things up now, and even though the foreigner here doesn´t get it every time, I do love humour and irony - so please keep it coming; you are a welcome visitor :D

You know, I think her involvement is fairly realistic. I'd feel a little perturbed if there was a dead, mutilated body on my land. Some books, when amateur's get involved are really trumped-up reasons---but this one sounds believable. I'll have to see if it's going to have a release in the States anytime soon. Thanks!

i liked this one too - I live in a big city (and love it) but I always seem to like the remote location books.

Elizabeth: it is not so much her involvement which is unrealistic as parts of the plot. I didn´t mind, though. The story caught me immediately, and I enjoyed every page of it.

Bernadette: I also enjoy all these crime novels on remote islands which seem to be the craze right now.

I'm behind in my blog reading... and I'll return later, but I have an award for you: http://bfishreads.blogspot.com/2009/08/awards-creative-rock-n-roll.html

Well I have to agree with you -- I'm pretty happy with a north Scotland setting and will forgive some plot problems. I haven't read this one, but I'll add it the growing list. I'm listening to a Hamish Macbeth novel now.

Beth; personally I wouldn´t even call it plot problems. I just try to write reliable reviews so I only used the word fanciful to warn readers to whom realism is of major importance. I am impressed by Bolton´s debut and looking forward to reading more from her hand.

And thanks a lot for the award!