A Question - and an Answer

As yesterday´s readers will know, poor bewildered Meg Gardiner does not quite remember how the photo and the weird squiggles below ended up on her fridge. As she says, she would very much like readers to explain to her what´s going on.

Here we go: 200 words for Meg, including the title. 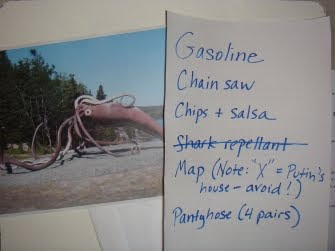 Squidders Calamari shuddered at the sight of her sqiddly legs, sporting a sadly laddered pair of pantyhose. Today, of all days, when she was off to a Gasoline concert, the squidgyest Danish rock band ever, in “The Submarine”. It must be that chain swordfish she ran into down “The Ink Sac”.

“Me love cuttle fish” the pushy Scandinavian said, whatever that meant. All she knew was she couldn´t stomach him.

Well, there was nothing for it than a squickie, a brief shopping spree in the local Fish and Cheap Store on her way. She tried a clumsy salsa; shopping was soooo liquefying! Elevated, she squirted herself generously with “Squidoo´s Best Shark´n´Swordfish Repellant,” set her OPS, Ocean Positioning System, and swannied off.

Squidders was squarely tempted to squeeze into Putrid´s House, the squalid Bone Meal King en route, but resisted. Squealing with delight she squashed herself into the store just before closing time. Gasoline, here I come!

After a brief calculation of her extremities she tentacly asked for roughly four pairs of pantyhose.

“Would that be ordinary, fireman or cephalopod hose?”

Disconcerted, Squidders uttered a chilling squelch as she realized she would have to consult M.S. Gardiner´s FreeGidaria® once again!
Indsendt af Dorte H kl. 14.30

Bookwitch: Yes, isn´t it amazing! - or perhaps not really, considering it is Meg´s fridge.

Belle: thank you. I knew immediately I had to take up this challenge.

Good luck with the competition - you've done a really nice job with your submission!

Thanks, Dawn. At least I had fun doing it (on a day when it was difficult for me to settle down to anything serious).