While you are waiting for my Bait-in-the-Box review, here is a post which may appeal to Rendell lovers. It deals with three Rendell novels written in the 1970s. For my first post about the 1960s look here, and you can find the second one, covering the early 1970s, here. 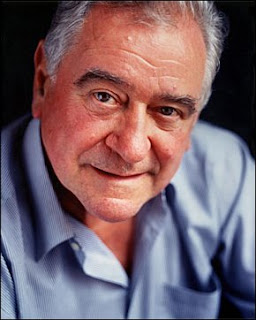 8) Some Lie and Some Die (1973)
"But why here? Why do they have to come here?" asks DI Michael Burden. In spite of his exaspiration, Kingsmarkham has not been hit by ´a plague of rats´ as Wexford retorts, but something as unusual and exotic as a pop festival, including thousands of long-haired, jeans-clad fans. Amidst all this love and harmony, the body of woman is found by a courting couple, and the case can begin.

Of course Reg Wexford revels in a bit of change, in the idea that people are allowed to be young for a period before growing up. Burden is still easily recognizable as the ever-worrying parent and Wexford´s naive partner. "Wexford was always poring cold water on his flights of fancy and he never got used to it." Yet some signs of development are discernable, e.g. in the following quotation, "... the solitary love affair he had had since his wife´s death had slightly broadened his mind." And this time some of Burden´s romantic theories actually hit the mark.

In spite of the quite modern festival theme and the female victim, women are not really conspicuous in this novel. At one point, Wexford consults a young detective, Polly Davies, but on the matter of the victim´s red dress, clearly indicating what female staff members are there for. We are also reminded that Wexford has a family when a district nurse mentions ´Mrs Wexford and the girls´ so one could argue that Rendell´s use of Dora Wexford is not very different from the way Conan Doyle threw in Mrs Watson once in a while [Sherlock Holmes & Women # 1] 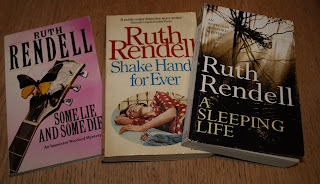 9) Shake Hands for Ever (1975)
Robert Hathall´s wife is found murdered in her own home. Chief Inspector Wexford dislikes the husband from their first meeting and soon makes up his mind that Hathall has murdered her. Hathall complains to Wexford´s superior, crying harassment, hereby ´forcing´ Chief Constable Griswold to take Wexford off the case, and from then on the story turns into Wexford´s personal, dogged chase of Hathall.

A determined, rather stubborn chief inspector is old news, but Wexford has lost three stone in the past year ´thanks to diet, exercise and the terror inspired in him by his doctor..´, and on the home front things also begin to happen: "Dora Wexford was too placid and too sensible to wait up for her husband, but she had been baby-sitting... although he had only parted from her four hours before, he went up to her and kissed her warmly. The kiss was warmer than usual because, happy as his marriage was, contented with his lot as he was, it sometimes took external disaster to bring home to him his good fortune and how much he valued his wife."

Another new side to Dora shines through when Wexford invites her to London. She immediately presumes that he has some sort of ulterior motive for going. "Wexford felt himself blushing. Why did she have to be so perceptive? It was almost as if she read his thoughts. But if she had been less perceptive, would he have married her? ´I´d love to, darling,´ she said blandly. ´When?´"

10) A Sleeping Life (1978).
The body of a middle-aged woman is found in Kingsmarkham, near her aged father´s house, a woman who has apparently lived in London for fifteen years without leaving a trace.

A recurrent theme in this book is Sylvia, Wexford´s elder daughter, and her recent engagement in Women´s Liberation. Her mother tries to explain to Wexford what it is all about, but none too sympathetically: "If Neil wants to bring a client home he ought to cook the meal. He ought to come home in the afternoon and clean the house and lay the table. She´s taken the children home for the sole purpose of getting him to put them to bed. And she´s taking care to stir them up on the way to make sure he has a hard time of it." - "She´s got a bee in her bonnet... You are the people, we are the others."

Yet Dora admits to understanding that her intelligent daughter is tired of chatting with her husband´s colleagues while the men discuss architecture. Soon after Sylvia leaves her husband, at least temporarily, when he refuses to pay for another woman doing her work while she ´trains for something´ which in his eyes can only be the massive unemployment of the period.

Dora and Reg love their daughter and try to support her as best they can, but know from experience that is best not to interfere. As a consequence of Sylvia´s rebellion, Wexford begins appreciating his reliable Dora who cooks his meals, waits quitly for him whenever he returns home, and generally makes his home a haven.

Sylvia being Sylvia, she is more engaged than diplomatic in her crusade against men so after an exchange of words which Dora takes quite personally she loses much of her mother´s sympathy: "´It´s not very pleasant,´ said Dora, not looking at him, ´to have your own daughter tell you a woman without a career is a useless encumbrance when she gets past fifty. When her looks have gone. Her husband only stays with her out of duty and because someone´s got to support her.´"

Wexford has been married long enough to tackle this crisis, though. "I often think if I were a bachelor now at my age, and you were single - which, of course, you wouldn´t be - I´d ask you to marry me." Furthermore, Neil and Sylvia patch up their marriage when Sylvia realizes that "it will take hundreds of years to change [men´s position in the world]".

Even though Reg and Dora Wexford do not exactly embrace women´s liberation, this book should probably be counted as the first of a long number of novels in which Ruth Rendell takes up a social issue. It is certainly possible to see the title not only as a reflection of the victim´s in some ways sad existence, but of women´s lives as such. And with my post about the early 1970s in mind, one can hardly escape noticing the dramatic changes in Wexford & Dora´s relationship.
Indsendt af Dorte H kl. 17.05

Fascinating! I will wait to see what transpires, but my impression is that the social conscience is much greater in the more recent books, and thus that the author herself has become more awakened and evangelical herself as the 80s dawned, then the 90s - I think "racism" hit the Wexford novels fairly late.

I do remember how one kind of accepted an unjust world in those times - I remember a girl at my (academic) school being told she could not study engineering at university because it was not suitable for a woman, and all kinds of similar things. Although on one level I knew it was wrong, on another level it was just "how things were". It seems that Rendell was more accepting in those days, but really changed so that now she is champing at the bit!

I do remember all the ups and downs with Sylvia, and Wexford's guilt that he preferred the other daughter, Sheila (the actress). That seemed to crop up in several of the books. And I think Sylvia's marriage comes up again in future books - all very nostalgic, and fascinating having these memories being dredged up!

These posts are great. Shake Hands for Ever has a twist which when I read it I thought very clever but now I don't think was original.

If you two keep encouraging me, I´ll be writing novel-length analysis of my books before long :D
It is a pleasure writing these different & more literary posts, however (said the teacher), but it will be even harder to keep them reasonably short when I move on to the 80s.

It's a pleasure to read your posts, relly wonderful with the more analytic posts. Keep them coming :-)

Thank you, Søren.
I am really glad there is an audience for these long posts. It will take some time before I have the next Wexford post ready, though, as I haven´t even begun reading the novels from the 80s, but I should be able to write another Sherlock Holmes post by the weekend.

I am not a Rendell lover, but I am hoping to be one soon. I simply didn't get a chance to read any of her books. I have a couple on my TBR shelf so I am looking forward to reading them.

Lilly, I really think Rendell deserves that you give her a chance :)
Her books are really cosy whodunnits, and she is very good at describing her characters and the environment.

I never read the early Wexford novels, so I find it highly interesting to learn more about the beginning of Sylvia and Neils marriage problems. As you known, I have always felt that Sylvia is unfairly treated and even ridiculed by RR in the newer books - my blood pressure would be sky-high if I actually opened these books :-)
OK, Sylvia is not the most diplomatic (or indeed tolerant) person in the world, but I really identify with her (but not with Sheila at all).
BTW, I also enjoy the longer posts!

I know that what I love Rendell´s books for are two things:
1)their cosy Britishness
2)the way she integrates social issues in a good plot
But you are right, she is in some ways old-fashioned and not politically correct.
And I am really pleased that some of my most faithful readers like these posts :)