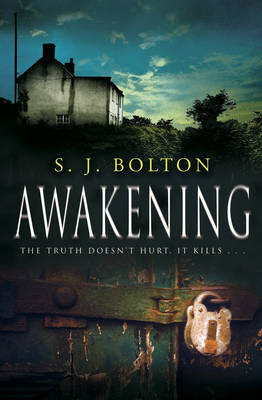 This thriller is the British writer´s second stand-alone.

“Bennie, looking even smaller than he had in life, lay before me. I didn´t need to touch him to know that he was dead, but I bent and stroked his coarse fur even so. There were a few shallow wounds around his face and neck where he´d injured himself, scrambling to be free as he´d sunk deeper into whatever pond or river he´d been flung. But the sack still wasn´t empty. I moved my fingers and something else fell out. Terribly injured, its body badly mauled and just about torn apart in places, the snake convulsed once before falling still.”

Who has doled out Roman justice? After the prologue, the plot begins when Clara Benning, the local vet and recluse, is called in to save a baby from a poisonous snake in its cot. Miss Benning feels safer around animals than humans, but when snakes of all kinds swamp the neighbourhood, she is forced to accept the assistance of Matt Hoare, Assistant Chief Constable, and Sean North, TV celebrity for his expertise on reptiles.

The story takes place in a village where everybody knows everybody else, except Clara who does her best to stay clear of two-legged creatures because she thinks they stare at her scarred face. So Clara has her own skeleton in the cupboard, just like the village where the dramatic occurrences are apparently related to the Witcher family and to the local church burning down in 1958.

So far all was very well, but here is my mid-way reading report: Clara Benning is being interrogated by two hostile policemen in an unlikely damsel-in-distress scenario, accused of – among other things – having assaulted six healthy, young people. After this cliché I found it hard to concentrate on the plot, and it seems to me that the author did not really know where she wanted to go for several chapters.

The ending is more satisfactory, but the novel did not quite live up to the great expectations I had to Bolton after her fascinating debut, Sacrifice.

As far as I remember, I bought this book myself.
Indsendt af Dorte H kl. 11.00

Thanks Dorte, I was thinking of doing an English author's book challenge and realised I had read very little by English writers so this post has been of great help. I shall try to source Sacrifice first as from what you say this sounds the better of the two books.

Dorte - I'm sorry to hear this one did not live up to your expectations; that's always disappointing. I agree with you completely that if something in the plot isn't believable, it is hard to concentrate on what happens.

Good review, Dorte. I liked the first book a lot (apart from the ending) - I do have Awakening but have not read it yet - in view of my queue I think it will have to wait a bit.

You know, if it doesn't ring true, it's just so hard to stick with the story...

Love the cover on this one, though...

This one doesn't sound as appealing to me as the Val McDermid in your more recent post.

I know what you mean -- sometimes a cliche or unlikely plot swing will take me completely out of the book. Then there is nothing for it, the author has lost me.

Tracy: I think her first is a well-written, compelling thriller. The last two chapters are a bit far out, but nevertheless I enjoyed it very much!

Margot: I think the problem may be that she thinks her snake plot is so scary she doesn´t need to make an effort with the rest. But I do not suffer from a snake phobia.

Maxine: yes, I saw it was one of your game, set and match books. It is not a hopeless book in any way, but I think the middle is problematic.

Elizabeth: the characters are good, and I like the beginning and end so if only she had revised the middle ...

Kelly: no, these two McDermid novels are not easy to surpass!

Beth: you are right, but as I liked her first so much, I will give her a new chance whenever she writes a new book. She has much potential.

I've been meaning to try her.

Patti: you´d probably enjoy her first. It was a thrilling debut with an unusual plot and an engaging protagonist.