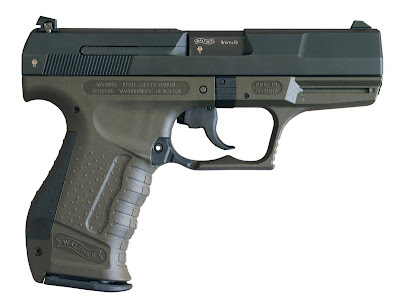 Detective Constables Tim Kinberg and Patti Witter seek out the caretaker who tries to Marie Oates´ flat. The door is locked from the inside, however, so they have to break it open.

On the living room floor they find a young woman who has been shot, possibly more than once. She is unconscious, her breath is shallow, and they send for an ambulance immediately. They assume they have found twenty-seven-year-old Marie Oates.

They call for technical assistance, and when the scene of crime has been photographed, they bag a handgun Walther P99 lying next to the woman. They continue their examination of the flat.

DC Patti Witter tries to get in touch with Ms Oates´ mother, but in vain. Instead she finds the phone number of Robert Charles Brown, Ms Oates´ boyfriend. She gets in touch with him an hour later in his rented room in Sherwood. He is devastated when he hears that Marie is severely injured. When asked, he admits that he owns a Walther P99, but he has not seen the weapon for months.

Detective Constable Kelly Adams goes to Marie Oates´ place of work. Ms Oates is a popular model, working for the bureau “Starlites” in Bedford. The owner of the bureau, Ms Betty Fordson, explains that she saw Marie Friday afternoon, and that she was expected at work today, Monday. Ms Fordson says Marie was chatting on her phone all day long, gossiping with friends, arranging dates or arguing with that sister of hers. Ms Fordson knows she had a new boyfriend, "but mind you, her relationships never last long. She is so pretty she can have anyone she wants."

You are the detectives; what will you do next?
Indsendt af Dorte H kl. 10.00

Has the boyfriend reported his gun as missing or stolen?

Can we obtain the phone records?

Does anyone now the name/whereabouts of the current boyfriend or indeed the names etc of any other boyfriends?

Is there any mention of a jealous wife/girlfriend or anyone else who might have 'done the deed'?

The detectives should ask Ms Betty Fordson, if she knows the name of her new (and old) boyfriend and how long since the new boyfriend relationship started. Also, ask for the names of any known friends or enemies both inside and outside of the Model Agency. Lastly get a list of all in and out going phone numbers for that day.

Then ask for the sisters phone number or address, so the can call her or go there. The later might be better, in order for them to observe her impression, when they ask for what was said in the last(s) phone conversation(s). Moreover, what/why were they arguing. Ask the sister for the names of any known friends or enemies, including when she saw her sister last.

The 'Old Boyfriend', should be asked for his weapon license, when he saw her last, if they were having any arguments, where they met and how long they have known each other. Did he know of any problems or enemies Marie had or have had. Incl when he last saw or spoke with Marie and getting his mobile/landline number.

They should also get a list of calls from Marie's home phone, as well as check if Marie had a mobile phone in order to check all calls.

Sorry if it is a bit long, but those are the things I would wonder about.

We should check the identity of the shot woman. Presumably her mother will go to the hospital, or we could compare a photo from Starlites Bureau.

Was the door locked from the inside? Did this require a key? If so then where is the key? Full search of the flat would be a good idea -- any other exits? Additional evidence about her relationships?

Was the gun Robert's own, or through his profession? If he had not seen the weapon did he not report it missing? Fingerprints on the weapon?

Can we find Ms Oates' cellphone, perhaps check call records? We should probably interview her sister and find out her whereabouts over the weekend.

Ask Robert how long he had been going out with Marie, and where he was over the weekend.

So many questions, so little time ....

Dorte - I agree that Marie's workmates should be interviewed. Who gets along with Marie? Who doesn't? And her supervisor - how do they get along? Also, do her workmates know of any particular boyfriend trouble she's been having? Also, someone should trace Robert Brown's gun if possible. What happened to it?

Oh, and I like your choice of names for those constables : )

Let me make sure I have the time frame right. This is Monday morning. Ms. Oates was last seen at work on Friday.

I definitely agree with checking out the phones....both her cell and her work line. In addition, I would see if there was a land line in her flat and if so, if there were any messages there.

What was the condition of the flat? Had the bed been slept in? Was Ms. Oates dressed for the day? (or dressed at all?)_ Was it possible to tell what she had been engaged in prior to the shooting?

One other thing... if I have my timeline right, I'd suggest checking around the neighborhood to see when Ms. Oates had last been seen. Perhaps in the local deli or convenince store, coffee shop, newstand, etc.

Did Ms. Oates have a car or use public transportation. How did she leave work on Friday? (with someone or along?)

My, you are prolific!

I´ll do my best, but my students keep sending me their brilliant questions also so ...

And I assure you, these constables are the best on the force!

Perhaps it would be a good idea to confirm the identity of the victim. Everything depends upon that verification.

Postscript:
Once upon a time when I earned my bread-and-butter in career field quite different from university teaching, I worked for a while in the military justice system where investigations followed a simple (though too frequently overlooked) formulaic matrix: First, find the facts.
Second, use the facts to form opinions.
Third, use the facts and opinions to arrive at conclusions and recommendations.
So, with that having been said, I applaud all the commentators who remain focused on the first step: find the facts.

R.T.: Nice to have reinforcements! I agree, facts are of major importance, and with all these precise questions today, there should be some progress in the case tomorrow.