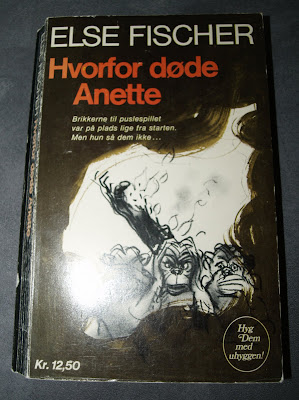 Instead of posting an ordinary review of this crime novel (one of my bargains of last week), I will try to review Else Fischer´s authorship. Several of her crime novels for adults were published even before I was born so the ten or so that I own have all been bought second-hand. They have not been translated into English, and she died in 1976.

On the whole, I like her Danish ´puzzles´, but they have one ´flaw´ in common: Fischer tends to follow a formula which is far too easy to recognize when you have read a few of them.

The main character is a young girl, usually very pretty, who visits or moves to a new environment. She gets caught up in something which seems to be suicide or an accident, and for some reason she lies about her name, her movements or her past (white lies which don´t seem to matter). Later it is clear that a murder has been committed, the police are involved, and our young girl is not really able to get out of her lies (often because she feels she must protect a brother or male friend, or something happens to interrupt her confession to the police).

Other common tricks are the girl lending her coat and scarf to another girl (who is attacked by the murderer soon after), the girl wanting to get in touch with an important witness (who is invariably killed before she has a chance to speak to him) etc.

The other female characters may seem friendly in the beginning, but later they are suspicious or jealous of our damsel in distress. The three-four young men all seem to be interested in her, but usually one of them is the murderer, one just wants to worm secrets out of her, and only one is genuinely interested in her and tries to save her.

And the environment: either a remote cottage or an ordinary (large) family house which is at some point isolated because of storm, snow, or a power cut.

So why read Else Fischer at all? Well, each story is entertaining enough – and you never know exactly who the murderer is.

Have you come across other crime authors who tend to use a formula?
Indsendt af Dorte H kl. 14.24

Interesting: I have not heard of this author before, so thanks for the summary.
I discovered the books by Peter Turnbull in the library a few years before I started blogging. I devoured them all as I enjoyed them so much. I realise they were all written to a forumula - the stories are about a division of Glasgow police (P division I think), and each novel features a similar scenes between the various characters. For example one couple are having an affair, and they have a very similar scene at a certain point in each book, and so on. In fact I did not mind this at all, and quite looked forward to going round the cycle as I read each book! Unfortunately, though, it now means that I cannot remember which I read and which I didn't, so I am not sure where to pick them up again (if I want to start them again).

I mentioned on Margot's blog that some books are so forumulaic that I stop reading them altogether after a while. the Eve Dallas series by J D Robb (aka Nora Roberts) is an example. There is the same cast of characters, and although there are some developments in the sense that one gets pregnant and has a baby, none of the characters devlops and the same old stereotypes (as they rapidly become by about book 10!) go round in each book. So what started out as a fresh, orginal series (policewoman in futuristic NY with a businessman lover) becomes very predictable.

Dorte - Thanks for sharing Else Fischer with us. I enjoy learning about authors whose work I don't know.

You bring up a really interesting point about formula, too. As a mystery novelist myself, that's one thing I think about a lot; I don't want my books too be so formulaic that they are boring and too predictable.

Authors put their "signature" on their work in their plots and their characters, so perhaps this is why you see a similar formula in all of Fischer's work - that's her "signature."

A lot of Robin Cook's work (especially his Laurie Montgomery and Jack Stapleton novels) also has a recognizable formula. Mysterious deaths occur. Since they are medical examiners, Montgomery and/or Stapleton find out about the deaths. Despite serious pressure to leave the cases alone, they investigate. One or both of them ends up in real danger, but in the end, the culprit is stopped. So why do I read Cook? Because the questions of medical ethics he raises are important and fascinating. Also, I read him because he is quite skilled at suspense; it's hard to put his books aside. Moreover, he adds interesting characters to his plots; most of his novels include at least a few major characters that aren't in other novels, so one gets to "meet" new characters. I think that when the author is skilled enough, forumlas can actually work.

Gosh, I'd have to say that almost every mystery I read has a formula.

I definitely write to a standard cozy formula--2 bodies, 5-6 suspects, 1 or 2 killers, amateur sleuth, small town, plenty of poisonings or blunt force trauma for the method. The occasional body at the bottom of a staircase. :)

I know what you mean, though, about the solution being formulaic. I do try to steer clear of that. It's all about the puzzle!

Maxine, as you can see, I don´t always mind very much either as long as her books are cheap enough. She even surprised me once by offering an unhappy ending.

Margot, it is not just her signature. She uses the same meat ball recipe every time and ends up with: meat balls. I know crime fiction was more predictable in the 70s, but Fischer stopped writing them and went on to writing a series for children which was much better.

Elizabeth, most crime writers use ideas that have been used by someone else before. We stir the caleidoscope and try to change the pattern, but most of the bricks are well-known.
So to make it quite clear how predictable Else Fischer is, I can tell you that on p 139 she lent her coat to another young woman. I told my son that now this woman would be attacked. She was, on p 141.

Dorte, loved your info about this author whom I have never heard about before. I will look for her books in the used book stores here in Copenhagen. You are not quite positive about this writer, but it seems like the mysteries are cosy enough, and sometimes that is what matter most. Anyway, I have a thing for another Danish writer and her crime novels: Kirsten Holst. I know her best period is during the 1980'es and not the 1970'es and that she just recently died (this year? or last year?), but I can re-read her cosy mysteries over and over again. And come to think about it, I may have mentioned this here before :-) Oh well, here it is again, then....Have a great evening.

I can't think of anyone quite as formulaic as Else Fischer. Agatha Christie has done a few that have similarities - the love triangle involving a young couple and another young couple, with the wife of one in love with the husband of the other. But it's never the same party who ends up being the murderer, so it's still a twist.

Louise: I don´t remember if you have mentioned Kirsten Holst before, but I also think that she is a fine crime writer. And as I think you have understood, Else Fischer´s stories are good and cozy if you take one at the time. If you read them all in a short while, you will laugh at them because they are so similar.

Belle: I know that some of these older authors (plus some modern ones, actually) did not exactly start from scratch every time they wrote a story. Many of their ideas and tricks were repeated a lot, but they probably didn´t write the same story ten times using different names. Well, now I exaggerate, but she DID something like that :D

Great post. Jeg have never heard of Else Fischer, but I must have seen her books unconsciously, since I'm allways looking through piles after piles of used books :-)