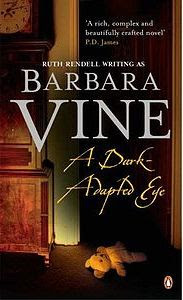 This psychological thriller is the first one crime fiction writer Ruth Rendell wrote under the pen name Barbara Vine.

In the first chapter, the reader learns that Vera Hillyard, Faith´s aunt, was executed for murder several years before the story begins. Over the next three-hundred pages we get to know Faith´s family, her father John and his sisters Vera and Eden who seem to be such a close unity when Faith has to stay with them during the Second World War. Faith struggles to be accepted by the two formidable women, but on the whole in vain.

I have read this wonderful thriller before, but thoroughly enjoyed meeting the characters again. Rendell´s Wexford series is police procedural of high quality, but I love the Vine books even more. So bear with me, dear reader, but I plan to review (read: recommend) my favourites while I am participating in my new writing course.

It is difficult to say exactly what is so fascinating about Vera and Eden, these two complacent, self-absorbed women, but I think many of us have tried being the third wheel, struggling desperately to fit in, to say the right things and to win grudging praise from our idols. And later there is little Jamie, of course, “the catalyst who had brought it all about.”

No spoilers, but another aspect I admire is the rather open ending. Who is the sinner, who is sinned against?

Well, if you should not have grasped it yet: I think this book is fabulous!
Indsendt af Dorte H kl. 15.09

This is one that has been on my "must read" list for a long, long time, but I never seem to get around to reading it. Thank you for the intriguing review, which works exceedingly well as the necessary catalyst for me to move this one to the top of "must read" stack of hundreds of other books.

Dorte - Congratulations on your 100th review! That's a nice milestone. You have a nice focus here on the characters involved in the novel, and I always find that intriguing. I've been wanting to read this one, and now you've motivated me to move it up on my list : ).

I loved this book too, and now you've motivated me to re-read it! That's what I love about Ruth R., that she can take characters who are seemingly not interesting, not admirable (complacent and self-absorbed, as you point out) and make them fascinating and their stories absolutely gripping.

R.T.: oh, it is always nice to hear that one´s review makes a difference :D

Margot: thank you! I don´t quite remember what I expected in February when I began blogging, but review no 100 does feel like a small milestone. What I hadn´t expected was how many new friends and acquaintances I would get :D

And I am looking forward to hearing what you think about the novel.

Cathryn: I am glad you agree with me, and that my readers seem to like "Barbara Vine". You will get more about her over the next few weeks.

Congrats Dorte on review #100! I haven't read many Barbara Vine/Ruth Rendell thrillers myself, but my mothers loves them. I haven't been too crazy with the few I've tried (except Asta's Book).

Are you sure you haven´t read the wrong Barbara Vine stories? ;)

Dorte, Congratulations on your 100 review. Quite a milestone. Thanks also for your recomendation. It sure looks great and I have not read any Barbara Vine/Ruth Rendell yet.

And you have something to look forward to. Ruth Rendell writes very fine police procedurals, and most of her Barbara Vine thrillers are also of very high quality.

I guess I must be missing out because I haven't read Barbara Vine/Ruth Rendell. I have heard lots of good things, but I really need to finish up at least one series ... I'm in the middle of so many.

Beth: as long as you promise to try her before or later. She is certainly part of my British top-five!