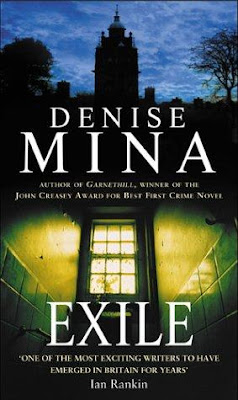 This crime story is the second part of the Scottish writer´s Garnethill trilogy.

When we meet Maureen O´Donnell again, she is equipped with a gorgeous, young lover, Vikram, but also with a dreaded father who has moved into a flat nearby. Her family do not believe she was abused by him so she feels ostracized by them as if she were the culprit.

The new plot begins when a cyclist nearly is hit by a car in London. During his effort to escape the accident he turns a somersault and lands on the riverbank. He receives his next shock when he realizes that he is sitting on the body of a long-dead woman, Ann Harris from the Glasgow Place of Safety Shelter where Maureen and Leslie work.

The sequel is captivating, but the tone is sadder and more serious than volume one. The violence and troubles in Maureen´s family take up so much space in her life that she cannot accommodate young Vikram or anything else.

I bought the book myself, and I know that if you enjoyed the first volume as much as I did, you will read the second no matter how much or little I write about it. And if you have not read the first, what are you waiting for?
Indsendt af Dorte H kl. 18.08

Dorte - Thanks very much for this terrific review. I second your enthusiasm for Garnethill; it really is a fine, fine novel. Folks, if you haven't read it, and it's not on your TBR list, I recommend you put it there.

I think I need to read the first! Thanks for the tip. :)

Margot: yes, it is brilliant, isn´t it?

Elizabeth: it is one of the best series I have found in a long time.